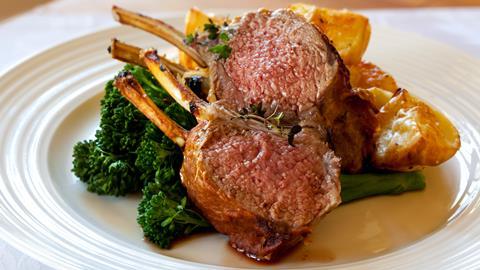 As the British food industry grapples with ongoing uncertainty over CO2 supplies, rapidly rising gas prices and the prospect of Christmas panic-buying, there was at least one piece of good news this week.

The US has finally agreed to lift its decades-old ban on UK lamb exports, Boris Johnson announced yesterday.

Having imposed restrictions on UK red meat imports in the wake of the BSE crisis over 20 years ago, the US lifted its ban on UK beef last year in an agreement ministers claimed would be worth £66m to the UK over five years.

Now US president Joe Biden has indicated lamb might also benefit from the easing of restrictions during a meeting on Tuesday with the PM, who is in the US for talks with UN leaders.

While Johnson clearly thought this was something to write home about, however, it’s not nearly as exciting a prospect as the deal on beef.

For a start, Americans don’t eat much lamb or mutton. Per capita consumption of beef in the US is about 55 pounds (24.9kg), according to the USDA, but per capita lamb consumption has dwindled from around five pounds (2.2kg) in the 1960s to just one (0.4kg) today.

And while the US is the second-largest sheepmeat importer behind China due to its own dwindling sheepmeat production, the market is already well served by imports from Australia and New Zealand, who command 75% and 25% market share respectively.

Australia also has tariff-free access to the US for lamb, something the UK has yet to secure. Given Johnson has now admitted a free-trade deal with the US is unlikely any time soon, UK exporters would face MFN (most favoured nation) tariffs into the US, which are 2.8 cents/kg for sheepmeat and 0.7 cents/kg for lamb.

There could be an opportunity to compete with New Zealand imports, which also face MFN tariffs because the US withdrew from the Trans Pacific Partnership in 2017. But even with this level playing field, UK farmers would struggle to compete given the lower cost of production in New Zealand. In May 2021, the gap between farmgate sheepmeat prices in New Zealand and the UK was in excess of £2/kg deadweight, according to AHDB.

What’s more, US interest in UK lamb imports would likely lie in high-value cuts, AHDB noted in a 2019 report on the opportunities from a US free trade deal. Which is problematic because the UK is already deficient in high-value cuts – which is why we import legs from New Zealand. “There is a question as to how much UK-produced lamb would be available to UK exporters, to satisfy the US market,” said the AHDB report.

Finally, haggis would not be included in the removal of restrictions, according to The Independent, which points out offal products are treated separately from red meat. Indeed, it became illegal to import British haggis into the US in the 1970s due to a ban on foods containing sheep lung.

That’s bound to disappoint Scottish haggis producers, who are envious of the success of their smoked salmon and whisky counterparts in the US and estimate there are up to 25 million Scottish-Americans desperate for their fix of sheep’s pluck.

All in all, then, the opportunity for UK lamb in the US is relatively small in the grand scheme of things. So, while it’s still something to be celebrated, it won’t be enough to make up for the labour crisis, rising gas prices and other Brexit woes faced by British farmers, let alone the fact a comprehensive US free trade deal now looks out of reach.