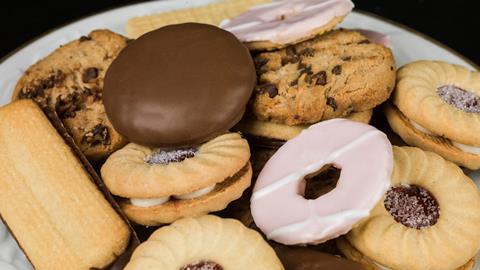 The nation has a regular biscuit habit. The majority of Brits will make a purchase at least once a week. And there has never been more choice, from added-protein breakfast biscuits to highly indulgent, taste-led products. So what do consumers really want?

This research was commissioned by The Grocer and carried out by Harris Interactive independently from Mondelez.

1. Over half of consumers buy biscuits at least once a week 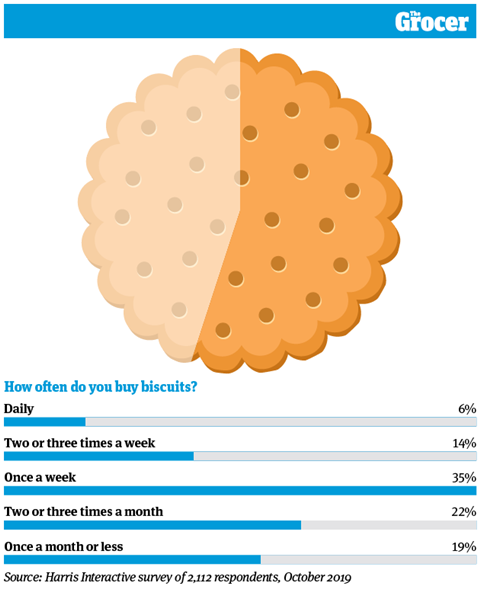 Britain loves biscuits. An overwhelming 96% of consumers buy into the category, according to our Harris Interactive survey. And 55% shop for biscuits at least once a week.

And there’s no danger of this number falling. Because appetite for biscuits is highest among younger consumers. Among the 25 to 34-year-old age group, a sizeable 15% buy biscuits on a daily basis. And 72% will make a purchase at least once a week.

That figure falls to 52% of 45 to 54-year-olds, and just 39% of 55-plus shoppers. These consumers are more likely to buy biscuits on occasion, rather than making frequent purchases. Indeed, 28% of over-55s buy biscuits once a month or less often.

There is also a slight gender split at play. Men tend to be slightly more frequent biscuit consumers. Eight per cent admit to a daily habit, compared with 4% of women.

In terms of regions, the capital is most fond of a biccie. In London, 68% of consumers buy biscuits at least once a week, compared with just 44% in Yorkshire.

2. Younger consumers are more likely to buy biscuits on the go 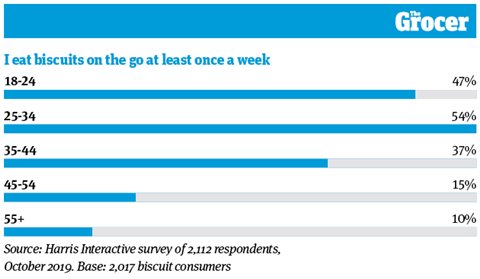 These figures go some way to explaining why as many as 15% of younger consumers buy biscuits daily. Because they’re not necessarily traipsing down to the supermarket to pick up a whole pack of biscuits every day. A large number are regularly buying a small treat on the go.

More than half of 25 to 34-year-olds eat biscuits on the hoof at least once a week. And 9% of this age group tuck in once a day. Only 1% of over-55 consumers match that frequency.

It stands to reason that the younger demographic is particularly interested in on-the-go options, says Susan Nash, trade communications manager at Mondelez International. “Younger consumers are leading increasingly busy and diverse lifestyles, meaning they are looking for convenience as well as functional and emotional benefits, while always demanding products that deliver a great taste,” she says.

3. Half of shoppers are interested in a biscuit snack pack 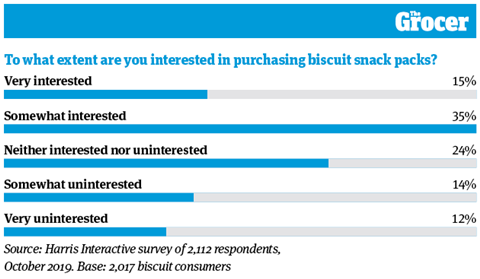 All this on-the-go eating means there is a high level of interest in a biscuit snack pack. Half of shoppers are either very or somewhat interested, and only a quarter are uninterested.

Unsurprisingly, the demographics that ate on the hoof most often were far more open to the idea of this option. Typically time-pressed Londoners emerged as a standout group for this market. In the capital, 68% of respondents said they were interested in a biscuit snack pack, compared with just 39% in the east of England.

Age also played an important part. More than 60% of the 25 to 34-year-old group would be interested in a biscuit snack pack. By contrast, only 34% of the over-55s were very or somewhat interested.

Interestingly, the youngest age group polled – the 18 to 24-year-olds – weren’t the keenest. Among this demographic, 51% were interested in a biscuit snack pack.

4. Women are more likely to see biscuits as a treat 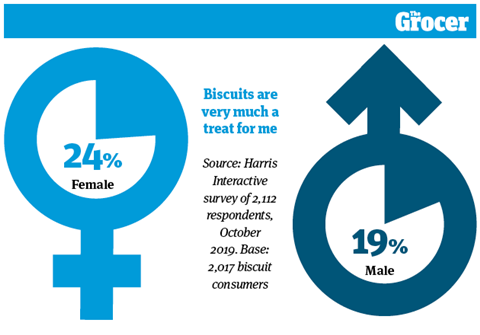 If there’s one thing consumers love, it’s a treat. That much is shown by the rise of more indulgent biscuits. Sales of what Kantar terms ‘special treats’ – in essence, premium, more indulgent fare – are up 7% to £205m.

But not everyone perceives biscuits as a particular indulgence. In terms of gender, women are more likely to see them as ‘very much’ a treat than men. That is perhaps down to men being slightly more frequent consumers of biscuits, which reduces the treat factor.

However, when it comes to age groups, that treat mentality was highest among the more frequent consumers. The 35 to 44-year-old demographic was most likely to see biscuits as an indulgence. Among this group, 26% said they were ‘very much’ a treat. And 25% of 25 to 34-year-olds thought the same. That drops to 19% of over-55s.

5. Consumers are prepared to indulge if the taste is right 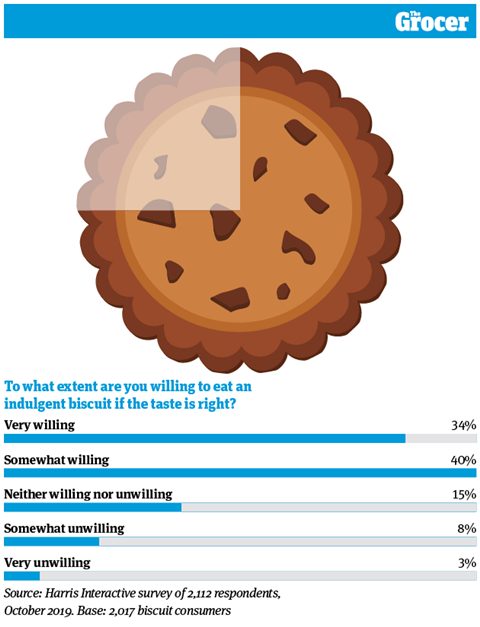 Health messages are all around us. As sugar concerns grow, biscuits are under the spotlight like never before. Indeed, they were one of the nine categories Public Health England challenged to bring about a 20% reduction in their sugar levels by 2020.

Even amid this public health message, it seems there is room for an indulgent biccie. Three quarters of consumers are at least somewhat willing to eat a biscuit that is high in calories or sugar.

The youngest age group was slightly less willing to overlook nutritional content. Among 18 to 24-year-olds, 68% said they would be very or somewhat willing to eat an indulgent biscuit. That compared with 78% of 35 to 54-year-olds.

But even among this younger age group, the majority would consider a less-than-healthy option if the taste was right. That fits with current attitudes towards treats, says Nash of Mondelez International.

“While consumers are increasingly health-conscious, when they do look for a treat, they’re often looking to maximise their experience, through products that taste great and they feel good about,” she says.

Indeed, only 3% of consumers would be very unwilling to go for an indulgent biscuit, even if it hit the taste mark.

6. Nearly half of consumers say brand is important to them 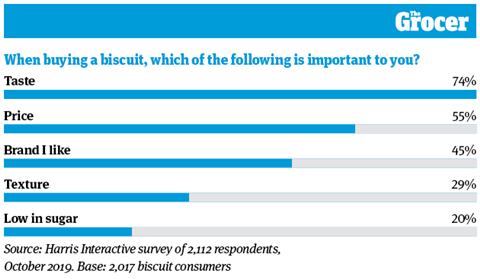 It’s good news for biscuit brands. Nearly half of consumers say brand sways their purchase decision – making it the most important factor after taste and price. That compares favourably with the tea category, for example, where only a quarter of consumers say they are influenced by brand.

As always, though, there is a demographic split. The typically less loyal younger generations aren’t so fussed about brand. Half of the 55-plus age group say brand is an important factor in their biscuit choices. That compares with only 39% of 18 to 24-year-olds.

And when it came to price, some parts of the country are more sensitive than others. In the south east, for example, 63% said price was an important part of their decision. But only 46% of consumers said the same in the east of England, and just 49% were bothered by price in the south west. 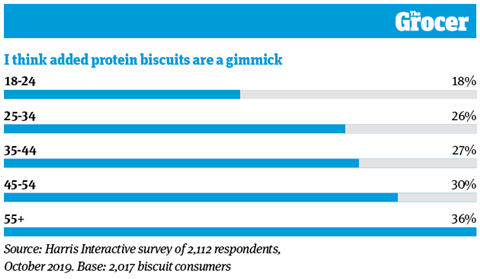 The protein trend has made serious waves in confectionery. So much so that protein bars are now widely seen as a healthier alternative to their chocolatey counterparts. Biscuits have also looked to jump on the trend with added-protein launches.

8. Londoners are more open to the idea of superfood biscuits 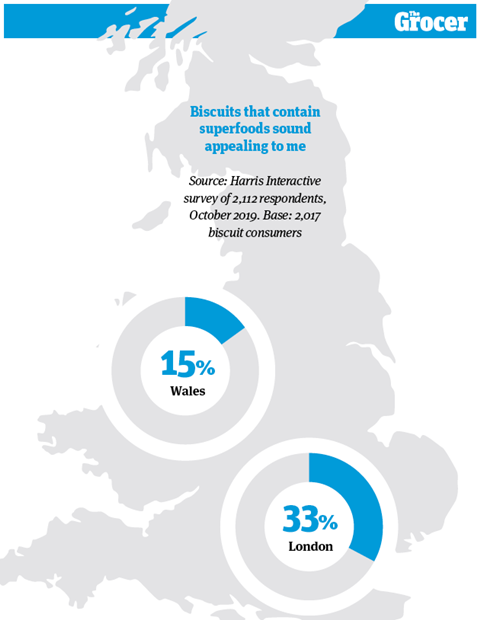 The word ‘superfood’ is bandied around a fair bit. So there is understandably a bit of scepticism around the idea of a superfood biscuit. Overall, a third of respondents said the idea didn’t appeal to them. And 27% believed superfood biscuits were a gimmick.

However, there are regional variations at play. A sizeable 33% of consumers in London said a biscuit containing superfoods would appeal to them, and 28% in Yorkshire said the same. That compared with just 15% in Wales.

Success depends on getting the taste right, says Mondelez, which has brought out two new Cadbury Brunch Bars containing added protein and superfoods. “Taste is the key factor in this, as consumers want the added benefits without compromising on their eating experience,” says Nash.

9. Over 50% of biscuits are an afternoon or evening treat 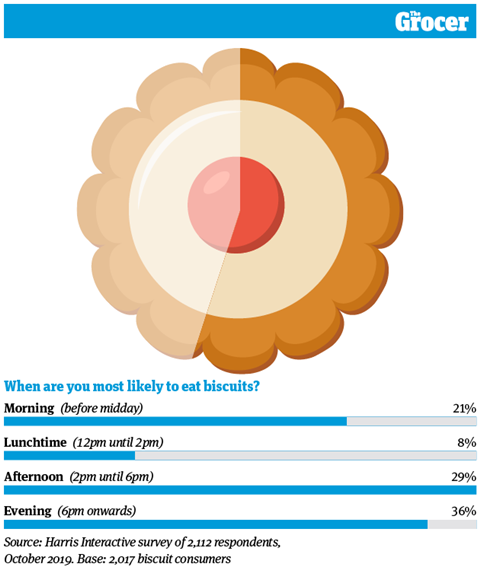 Elevenses are considered a key time for the biscuit trade. But it turns out the afternoon and evening are the most popular times of day to indulge in a biccie.

A whopping 36% of consumers eat a biscuit in the evening, and 29% will chow down in the afternoon. Overall, far more consumers will eat biscuits after midday than before midday.

However, younger consumers are more likely to eat biscuits early on. A sizeable 17% of 25 to 34-year-olds will eat a biscuit before 10.30am, compared with just 8% of over-55s.

In terms of regional differences, the capital came out as most partial to an early morning biscuit. In London, 22% of consumers said they ate biscuits before 10.30am. That compared with just 7% in Yorkshire and the north east.

Just 10% of consumers said their consumption didn’t differ throughout the day. Which proves that in the world of biscuits, timing is everything.

10. But there is appetite for a breakfast biscuit 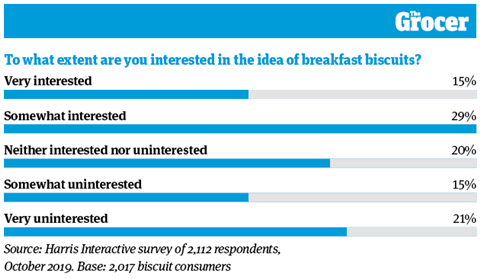 Only 12% of consumers eat biscuits before 10.30am, according to our poll. But that hasn’t dampened appetite for a breakfast biscuit. A sizeable 44% of consumers said they would be either very or somewhat interested in the concept. That’s larger than the 36% who said they were uninterested.

This appetite is backed up by sales figures. Kantar figures show breakfast alternatives – defined as breakfast biscuits and cereal bars – have risen 5.3% to be worth £466m [52 w/e 21 April 2019]. And that’s only take-home sales.

Younger consumers were particularly open to breakfast biscuits. Among 18 to 24-year-olds, 57% were very or somewhat interested. That stands to reason, given that they are more interested in on-the-go options. “Breakfast biscuits tap into the consumer need for a convenient and tasty way to have breakfast in their busy daily lives,” says Nash.