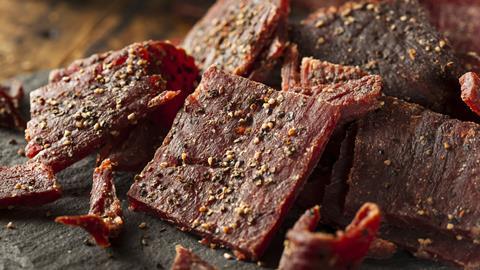 As the coronavirus outbreak prompts Brits to look for healthier snacks, meaty options are benefiting from their lack of sugar content. Promisingly for the category, younger shoppers are buying in, tempted by spicy flavours and high protein levels

1. Nearly half of Brits have a preference for savoury snacks 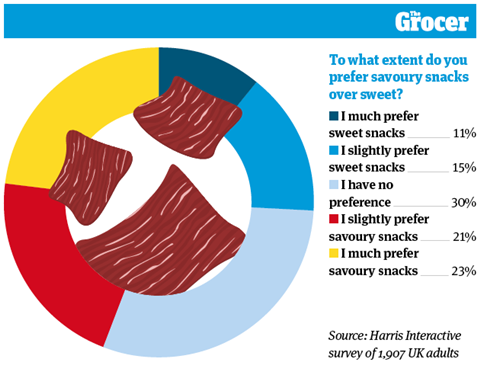 It’s the eternal dilemma when choosing a snack: do you opt for something sweet and sugary, or salty and savoury? A higher number of Brits would plump for the latter, suggests our exclusive survey conducted in partnership with Harris Interactive. Of the 1,907 adults surveyed, 44% said they preferred savoury snacks, while just 26% favoured sweet. And 30% were in the middle.

That preference for savoury flavours increased with age. Among 18 to 24-year-olds, 34% veered towards savoury snacks. That figure grew significantly to 46% in the 55-plus age group. Men were also more likely to choose savoury flavours, with 47% favouring this type of snack compared with 40% of women.

2. More than a third eat meat snacks at least once a week 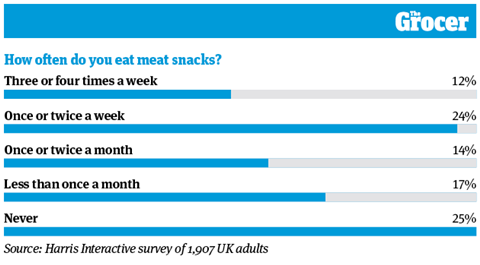 Three quarters of Brits buy into meat snacks, according to our survey. And a sizeable proportion make them a regular part of their snacking regime. Overall, 36% said they ate meat snacks at least once a week. A slightly lower percentage – 31% – ate them once a month or less.

3. The majority eat meat snacks in the afternoon

That preference for afternoon snacking was fairly consistent across all demographics. If anything, the afternoon was a particularly popular time for younger consumers. In the 18 to 24-year-old age group, an overwhelming 74% named it their key time for eating a meat snack. That fell to 54% of 55-plus shoppers. But even in this older age group, only 13% said they were most likely to eat a meat snack in the morning.

4. Chicken bites emerged as the most popular meat snack 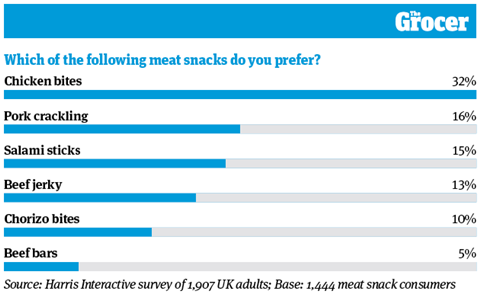 From chorizo bites to beef jerky, there are plenty of different meat snack options on the market. Of these, chicken snacks proved the most popular. Around a third of shoppers named chicken bites as their favourite meat snack, while pork crackling took second place with 16% of the vote.

The appetite for poultry is down to the wider focus on healthy eating, says Laura Trivulzio, marketing director at Peperami and Jack Link’s. “In recent years, there has been increased demand from consumers for nutritious, high in protein snacks,” she says. “In particular, chicken, being lean and low in fat with a perceived healthier image than red meats, has prospered.”

5. Six in 10 like spicy flavours in their meat snacks 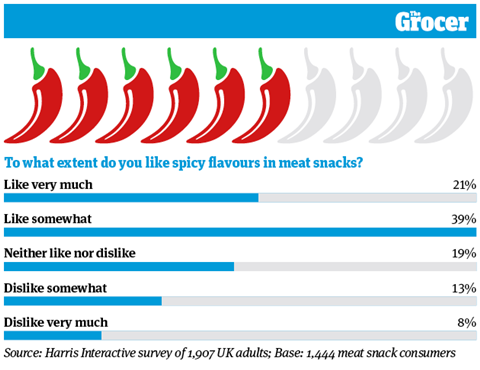 Hot and spicy flavours are becoming ever more prevalent in meat snacking. Looking at this chart, it’s easy to see why. Six in 10 consumers said they either ‘very much’ or ‘somewhat’ liked spicy flavours in their meat snacks. Only 21% expressed any aversion to spice.

That wasn’t the only demographic difference here. Men were also more likely to go for heat in their snacking choices. Spicy flavours were favoured by 64% of male respondents, compared with 56% of female respondents. And 10% of women said they ‘very much’ disliked those flavours.

There was little in the way of regional differences on this front. However, the areas most likely to go for heat were the north east and the south west, where 63% said they liked spicy flavours in their meat snacks. That figure fell to 54% in Scotland and Wales, which were least likely to be tempted by spice.

6. Two thirds have no health concerns over meat snacks 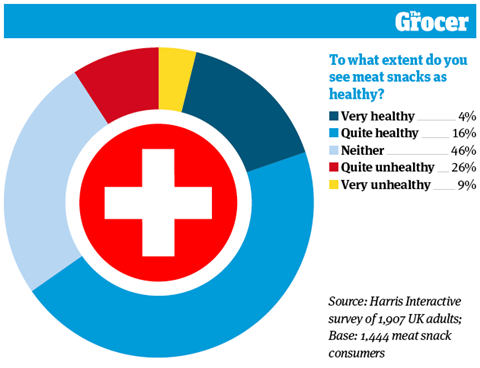 Trivulzio says this is a particularly important attribute during Covid-19. “High-protein, lower-sugar, gluten-free and under 100 calories have become key benefits consumers are looking for,” she says. “As a result, throughout coronavirus the meat snacking category has continued to grow ahead of last year.”

7. Flavour and quality are the most important factors for shoppers 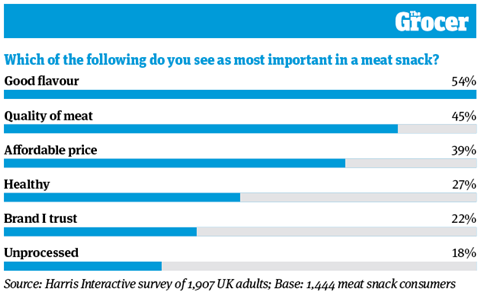 Taste is crucial to any snack. So it’s no surprise flavour emerged as the most important driver when buying a meat snack, cited as important by 54% of respondents.

Trivulzio says quality is becoming increasingly important to shoppers in their food choices. “Consumers’ purchase decisions are no longer driven by taste alone, quality is now high on their agenda – particularly when it comes to the meat snack market,” she says. 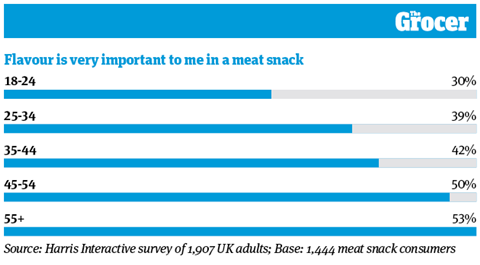 When asked to rate the importance of flavour, 44% of respondents deemed it ‘very important’ in a meat snack. A further 30% said it was ‘somewhat important’. And only 15% saw it as either very or somewhat unimportant.

So it’s fair to say flavour is important to all demographics. But it’s particularly crucial for the older generations. Among the 55-plus age group, 53% named it as a very important factor, compared to 30% of 18 to 24-year-olds.

In terms of regions, Yorkshire emerged as the place where flavour was rated most highly. There, 48% deemed taste very important when it came to choosing a meat snack. That compared with 40% in London.

9. Seven in 10 see meat snacks as a good source of protein 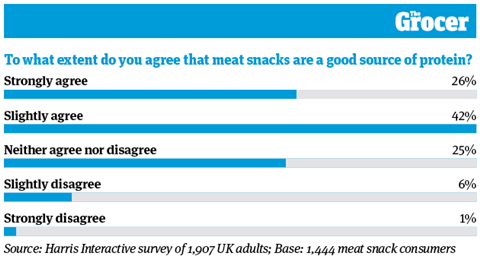 Meat snacks naturally pack in a high amount of protein. And it seems that message has got through to consumers. A quarter strongly agreed that meat snacks are a good source of protein, while 42% slightly agreed. Only 7% disagreed with the statement.

Among younger consumers, who tend to place a higher value on protein, that perception is particularly strong. In the 25 to 34-year-old age group, 30% agreed meat snacks were a good source of protein. That fell to 19% of 55-plus consumers.

Trivulzio says protein content is becoming a particularly important part of the meat snack proposition. For that reason, Jack Link’s launched its duo of Beef Bars in May, designed to offer a high-protein, low-calorie option.

10. Women are more likely to see meat snacks as a good lunchbox option 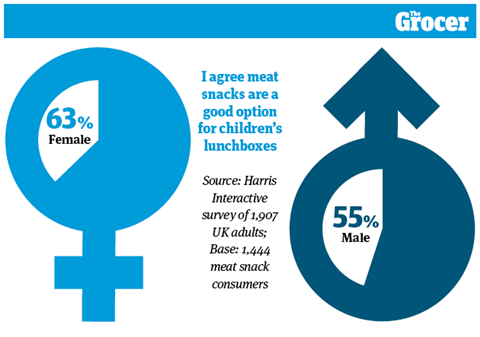 Lunchboxes have become a minefield for parents. Sugary snacks are out, and may even be confiscated in certain schools.

So it’s positive that 54% of respondents either strongly or slightly agree that meat snacks are a good option for children’s lunchboxes. As shown in our chart, women were slightly more likely to agree with that statement.

They are backing that up with action, too. Overall, 64% of respondents with children at home said they bought meat snacks for their kids.

This reflects that “historically children have been a core consumer group” for meat snacks, says Trivulzio.