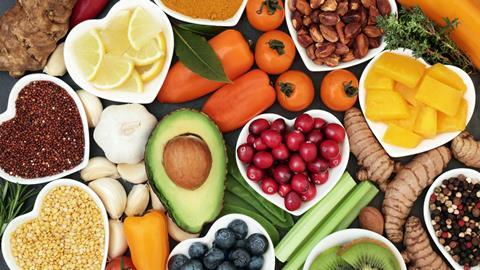 Functional food and drink has become big business in the pandemic. Aside from immune support, consumers are looking for other wellness benefits such as help sleeping and more energy. And they want those benefits in a natural way, our research shows

1. Most Brits maintain mental and physical fitness through sleep 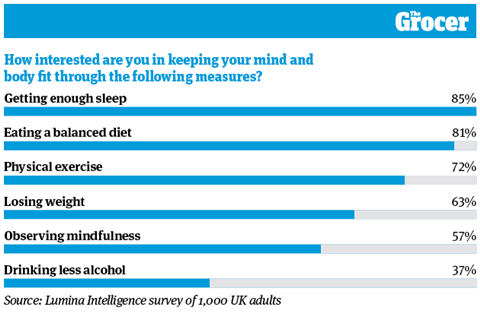 The word fitness typically conjures up images of joggers or gym-goers. As it turns out, Britain’s most popular way of maintaining mental and physical health is much more sedentary.

According to our survey of 1,000 UK adults by Lumina Intelligence, getting forty winks is a more popular way of keeping fit than exercising. The most interest in sleep came from 35 to 44-year-olds, among whom 92% saw it as a way of keeping fit, compared with 79% of over-65s.

Eating a balanced diet also ranked highly, although women were more interested in doing so (85%) than men (76%). Finally, more than half of consumers said they were interested in maintaining their mental health through mindfulness.

2. Men are more likely to cut down on alcohol consumption for their health 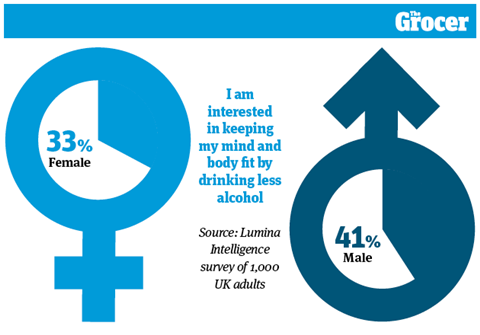 As chart one shows, Brits lean towards other means of maintaining mental and physical fitness – such as sleep, diet and exercise  – ahead of cutting down on alcohol.

But there are some demographic differences. Men are more likely than women to cut out the booze. In terms of ages, the over-65s were least keen on doing so (23%), but interest rose sharply to the highest point – 45% – in the age bracket just below (55 to 64-year-olds).

Overall, 37% said they were interested in cutting alcohol consumption. Ben Parker, GB at home commercial director at Britvic, says it “proves consumer habits are changing” around alcohol and wellness.

3. Dairy is the most popular type of wellness product 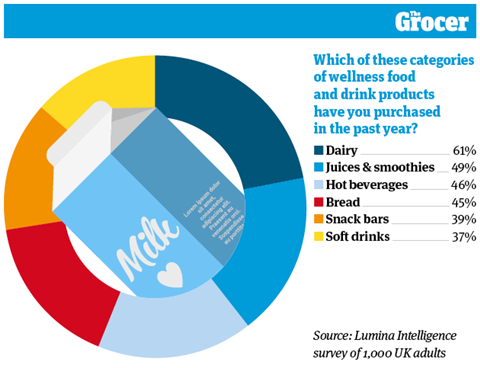 The proposition seems to be proving popular. A total 61% of consumers said they had purchased a dairy-based wellness product in the past year. In Wales, that figure rose to 70%.

The next most popular form of wellness product was juices & smoothies (49%), while a similar number had bought a wellness-focused hot beverage (46%).

But drinks weren’t the only star performers: 45% of respondents said they had purchased a functional bread product, rising to 58% of over-65s.

4. Younger shoppers are willing to pay more for added benefits 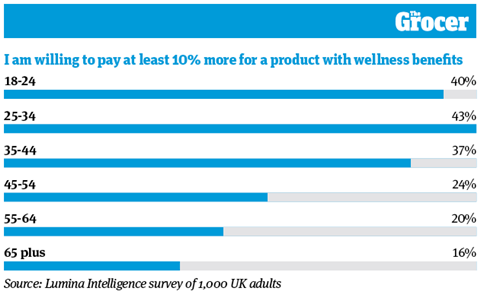 An even greater focus on wellbeing in the pandemic has resulted in “the average spend on functional wellness drinks being more than twice the average price per litre spent on soft drinks”, says Britvic’s Ben Parker.

That willingness to pay more comes through in our data. Although 31% of consumers wouldn’t pay extra for wellness benefits, younger shoppers are open to a sizeable premium. Around four in 10 consumers under 35 would pay 10% extra or more. Parker believes brands should be capitalising “by advertising where their target audience is”, and making “the benefits of each wellness drink clear on pack, so it’s simple and easy for younger shoppers to find what they are looking for”.

5. Energy is the most sought-after functional cue 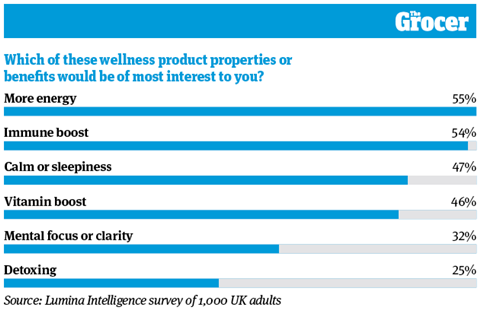 Brits must be a lethargic bunch. More than half of respondents to our survey said they would be most interested in wellness products that provided them with more energy. “More people are looking for benefits above and beyond their standard diets, such as boosting energy levels,” says Britvic’s Parker.

“Energy is one of the fastest growing reasons to choose a soft drink, with over half of people feeling tired all the time,” he adds, citing Kantar data.

That need for energy was closely rivalled by immunity – perhaps unsurprisingly in a global pandemic. Immune-boosting properties were of interest to 54% of people, and most sought after by 45 to 54-year-olds (62%).

6. Londoners value natural ingredients the most in functional drinks 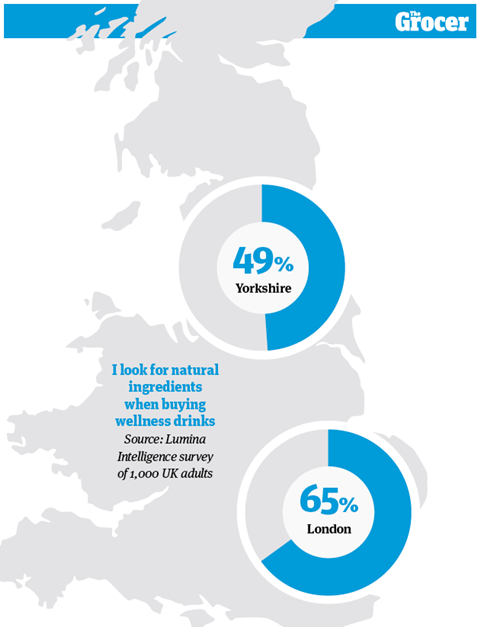 Forget artificial sweeteners and flavours. Brits are “looking for a more natural lift” from their wellness drinks, according to Parker. That’s backed up by our data, which shows natural ingredients were most important to 55% of people when buying a product – beating attributes such as vitamin content (46%), sugar-free (45%) and low- calorie credentials (36%).

But opinions on natural ingredients differ across regions. While they are most important to Londoners, consumers in Yorkshire value them least. The East Midlands is the only region to value another credential higher: 52% of respondents there put vitamin content first.

7. Young people doubt the effects of wellness products the most 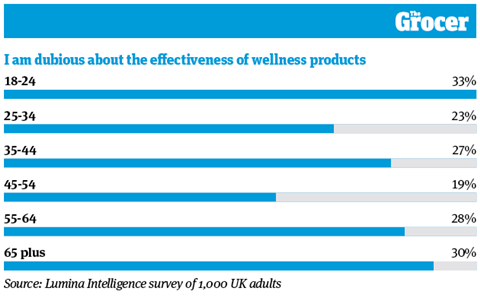 Despite more than half of Brits consuming wellness products once a week or more (53%), a sizeable proportion of people from each age group are unsure about how effective they really are.

Younger people are the most doubtful, with 33% of 18 to 24-year-olds admitting they are dubious of their efficacy. This is closely followed by those aged 65-plus (30%). On the other hand, the 45 to 54-year-old age group are most convinced, with only a fifth expressing doubts.

To ensure shoppers are confident in the benefits of wellness products, Parker believes retailers should stock trusted brands “that clearly communicate and simplify their benefits to consumers”. 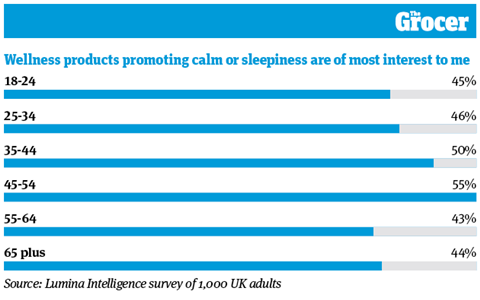 Stress and insomnia have been common issues during the pandemic. And it seems they have hit middle-aged consumers the hardest, if their purchasing habits in the wellness category are anything to go by. Over half (55%) of those aged 45 to 54 said products promoting calm or sleepiness were of most interest, while half of people aged 35 to 44 said the same.

The 45 to 54-year-old age group also purchases the most hot beverages with wellness benefits (51%), suggesting products such as sleepy tea are a regular feature in their shopping trollies. Britvic’s Parker believes such products “have a role to play here as part of a balanced lifestyle which includes plenty of sleep”. 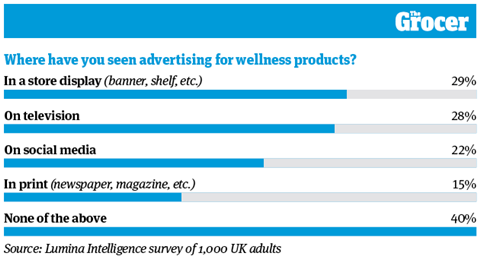 It seems wellness brands could up their game when it comes to promoting their wares. Because 40% of consumers surveyed said they hadn’t seen any advertising for wellness products, including on television, in print or on social media.

However over a quarter had seen some TV activity. In-store campaigns had the highest level of recall of all media, with 29% of respondents having seen a display, banner or shelf-edge ad.

Britvic’s Parker believes this a sensible strategy. “Brands need to be advertising where their target consumers are,” he says – a principle that has been applied to the latest £1.5m advertising push for Britvic’s wellness drink brand, Purdey’s. 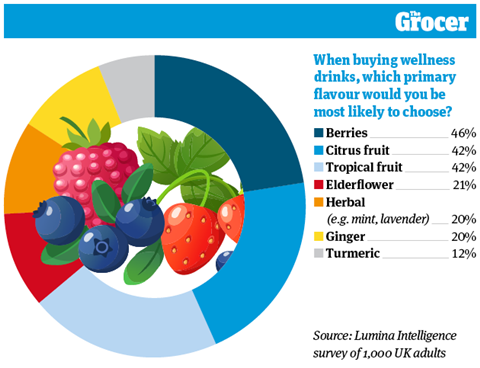 It wasn’t long ago that turmeric was all the rage in food & drink. But when it comes to wellness drinks, it seems the ingredient – along with its stablemate ginger – are less in vogue.

When asked which primary flavour they would be most likely to choose in a wellness drink, consumers placed the two ingredients bottom of the pile.

Elderflower ranked slightly higher (21%) but there was a significant jump in popularity when it came to fruit flavours. Tropical and citrus fruits were both favoured by 42% of respondents, while berries topped the table (46%). Brands would do well to take note of such flavour preferences, as 15% of shoppers say they buy wellness products mainly for their taste.