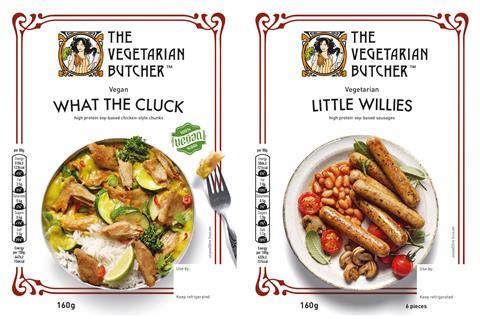 Unilever acquired The Vegetarian Butcher in 2018

Unilever has unveiled plans to massively scale up its plant-based offer.

The fmcg giant said this week it wants to achieve €1bn worth of plant-based meat and dairy alternative sales per annum within the next five to seven years.

It would achieve this target by expanding The Vegetarian Butcher, which it acquired in 2018, and introducing more vegan alternatives from its core brands such as Hellman’s, Magnum and Wall’s, it said.

The move comes as part of a wider range of “Future Foods” goals unveiled by the supplier this week, through which Unilever wants to encourage shoppers to “transition towards healthier diets and to help reduce the environmental impact of the global food chain”.

These include: halving its food waste in global operations “from factory to shelf”, doubling the number of products delivering “positive nutrition” globally by 2025, and continuing to slash calorie, sugar and salt levels from its portfolio.

In the UK & Ireland Unilever had “already started to make headway on food waste and carbon reduction as part of the 2025 Courtauld Commitments and are already making progress on sugar and salt reduction in our products,” said Unilever UK & Ireland VP foods & refreshment Andre Burger.

It was “widely recognised that the current global food system is inequitable and inefficient”, added its foods & refreshment president Hanneke Faber.

“One billion people around the world are hungry while two billion are obese or overweight. One third of all food produced is thrown away. And animal agriculture is the second largest contributor to greenhouse gas emissions after fossil fuels and a leading cause of deforestation, water and air pollution and biodiversity loss.

“It’s not up to us to decide for people what they want to eat, but it is up to us to make healthier and plant-based options accessible to all.”