Caterforce announces plans to increase turnover by 12% by 2021 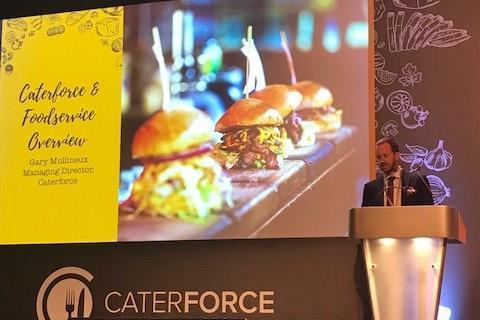 Foodservice buying group Caterforce has announced plans to increase turnover by 12% to £603m by 2021.

The target was set by interim MD Gary Mullineux, at the Caterforce annual conference at Celtic Manor in Wales earlier this month.

Mullineux said the group’s seven members had made major investments in infrastructure over the past two years with more than £37m spent on expansion and improvements.

“As a group it’s been a very successful 12 months and the business is in an extremely healthy position. Each of our seven members has continued to grow, invest its infrastructure and as a group we’ve put a lot time as well as budget into key areas such as people, technology and locations,” he said.

Caterforce confirmed its members will continue to invest a further £23m over the next two years.

It also launched a new code of conduct for suppliers and pledged to remove all black plastic and switch to unbleached cardboard packaging for its Chefs’ Selections own brand by 2022.

It has also committed to ensuring 100% of its plastic packaging is reusable, recyclable or compostable by 2025.

Mullineux added: “It is now more important than ever for businesses to embrace corporate and social responsibility. Consumers are now far more aware of issues such as sustainability, personal health and wellbeing and animal welfare, that’s why as a business we’re committed to change. On top of the recycling targets, we’ll be also committing to reducing the amount of sugar and calories in our own-brand products by 20% by 2025.

“All of this alongside the success of our Chefs’ Selections range and newly launched coffee brand, Roast 440, has helped contribute to what we believe will be record turnover by 2021.”