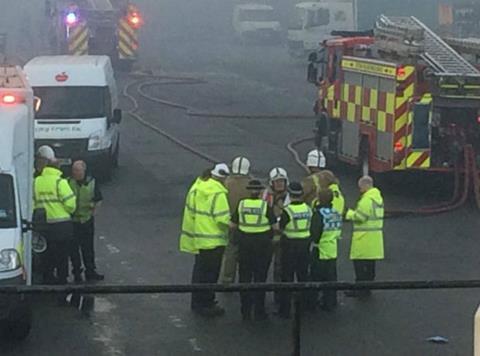 A Glasgow fruit market has experienced a major fire that burned through 90% of the two-storey warehouse.

Emergency services were called to the warehouse on Blochairn Road at 3.44am today. Seventy firefighters with 12 appliances, plus four aerial appliances and support units, arrived on the scene, attempting to control the flames using high-powered hoses.

Scotland’s Fire Rescue deputy assistant chief officer, John Joyce, told BBC Scotland it was an “extensive and complex” fire, which fire officers expected would take most of the day to deal with. No casualties have been reported.

Total Produce UK, which runs a site at Blochairn Fruit Market, told The Grocer: “We are aware of the incident currently unfolding. Our understanding is that the Scottish Fire & Rescue Service Fire Department is on site and in control of the situation and that there are no casualties.

“Our first thoughts are for the safety and wellbeing of our people, our customers and our fellow traders and suppliers on the market. We have been in communication with our senior management in Glasgow and understand that the facility has been evacuated and our people are safe.”

Total Produce UK had initiated its contingency management protocols and all operations conducted out of its Glasgow facility had been redirected to Edinburgh, the company added.

The warehouse’s owner, City Property Glasgow, said its markets team was on site “to support both our traders and emergency services. We are hugely relieved that at this stage it appears no one has been injured and we have contacted all of our traders to check their staff are safe.

“We would like to thank the emergency services for their quick response. Our priority now is to establish alternative arrangements in order that normal business can resume as soon as possible.”

Plans were progressing to put temporary measures into place to assist tenants, said the company. “We will provide further updates as and when they become available.”