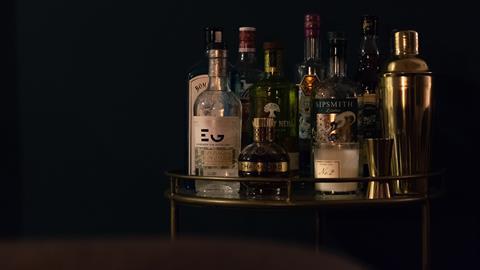 Fake news? More like fake booze. Fake gin, specifically, according to the Daily Telegraph, which claims the The Gin Guild has ‘gone to war’ with the recent horde of gin liqueurs hitting the market.

The mults have certainly gone nuts for gin liqueurs, with major listings for the likes of Bristol Distilling Co and a slew of NPD from well-known posh spirits brands such as Pinkster and Eden Mill. The Gin Guild’s director general, Nicholas Cook, argues many of these drinks, which as a rule come in at around the 20% abv mark, are dishonestly cashing in on Brits’ love of gin by over-exaggerating how closely they are related to mother’s ruin.

“A lot of people are mis-buying these products because they think they are gin,” says Cook. That’s not to suggest these products don’t use gin in their production, but he suggests “they are packaged in a way that is deliberately designed to draw the customer in to think they are buying a gin, which is not right”.

In some cases this is a feasible argument. On the bottle of the category’s bestselling SKU, Edinburgh Gin’s Rhubarb & Ginger Liqueur (below), for example, the word ‘liqueur’ is not exactly prominent.

But a glance at Tesco’s growing roster of gin liqueurs shows this is not the case universally. In fact it’s the only SKU currently in Tesco that one could argue even passably obscures the ‘liqueur’ designator on its bottle.

Brands in this subcategory are also differentiating themselves in other ways: the majority (including Edinburgh Gin’s) are sold in 50cl rather than typical 70cl spirits bottles and retailers are merchandising them separately to standard gins. The price range of gin liqueurs is also, on average, significantly lower than the current roster of top-end gins.

The Gin Guild says trading standards are already cracking down on some gin liqueurs. Without a list of names the impact and scope of this is hard to comment on. It’s possible that none of these supposed imitators are those that have made it into the mults.

It’s worth noting that Edinburgh Gin’s liqueur has, in just over one year since launch, become one of the UK’s top 50 booze brands, with £16.5m value sales over the past year (a 287.2% increase on the prior period). Which suggests that even if a few shoppers mistakenly thought they were buying a full-strength gin, on the whole they weren’t disappointed with the product they ended up with [Nielsen 52 w/e 8 September 2018].

Which raises the question: why all the fuss? Isn’t the beauty of gin in how versatile and open to new flavours and experimentation it is? Not for everyone. Some ginmakers are crying out for tighter regulation. London-based Hayman’s, for instance, has started its own ‘campaign for real gin’.

Tighter regulation around labelling and marketing these drinks could provide an answer to their woes. The Gin Guild’s Cook suggests gin liqueurs could be renamed as ‘liqueurs with gin’, thus “negating ’gin’ as the prime descriptor”, or as ’juniper spirit drinks’. But this comes with its own worries.

One of the reasons gin has exploded so quickly is there are actually very few rules about what you can and can’t do with it – unless you’re making London Dry, which can be no lower than 37.5% abv, contain no artificial ingredients and has to be juniper-led. If you’re willing to ditch the ‘London’ moniker then the sky is virtually the limit when it comes to experimenting with flavours and botanicals. And the sheer proliferation of gins now available means that, unlike less accessible categories like whisky, there are a multitude of flavours to suit a wide variety of tastes and mixers.

Like it or not, much of the excitement in gin is now moving into flavours and liqueurs and away from the posh, ‘craft’ gins that so effectively resuscitated the category. That is where the innovation is.

But it’s a two-way street – it’s not unreasonable to suggest that a shopper who buys Edinburgh Gin’s liqueur would then trade up to the core Edinburgh Gin. Or that gin drinkers lured away from wine and alcopops by the mainstream appeal of Gordon’s Pink, for instance, wouldn’t then be tempted to explore the upper end of the category and experiment with newer flavours.

To restrict the ability of brands to tie these products aesthetically and thematically to gin – even if it sets the sector’s traditionalists squirming – might help protect gin’s sanctity, but with so much of gin’s growth coming from NPD, this may not be wise. Scotch has benefited massively from tight protections that have enhanced its luxury status and protected its price point and heritage, but arguably stifled a lot of genuine experimentation with the category. Perhaps this is for the best – the idea of low-strength, fruit-infused whisky is truly retch-inducing.

There is, of course, the worry that an endless churn of flavours and newness is not conducive to long-term, stable growth in gin. But if that’s so, tighter regulation should have been brought in long ago. That ship, so far as polluting the purity of craft gin goes, sailed the moment Gordon’s Pink hit the shelves.