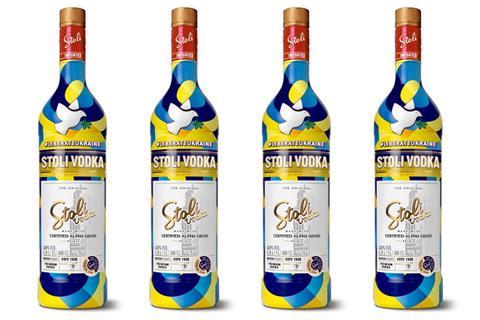 Stoli has launched limited-edition Ukrainian-themed bottles of its vodka.

All proceeds will go towards Stoli Group’s goal of raising $1m for World Central Kitchen – a non-profit organisation providing meals for refugees fleeing Ukraine and citizens displaced within the country – by Ukrainian Independence Day on 24 August.

The bottles are listed at selected specialist spirits e-tailers (rsp: £40/700ml), and on sale at 25 partner bars and clubs.

They are the first to feature the updated brand name ‘Stoli’, following the Latvian vodka brand’s decision to change its name from ‘Stolichnaya’ to distance itself from Russia.

It announced the rebrand in March, after videos of shoppers pouring its vodka down the drain circulated on social media.

The design of the limited-edition bottles – which feature the Ukrainian flag colours – was “inspired by the communities around the world that have come together to support the people of Ukraine”, said Stoli.

The limited-edition bottles would “not only provide financial resources to feed Ukrainian refugees”, they were “also a symbol of solidarity between Stoli’s team and customers with Ukraine”, McKinney added.

Stoli Group will also hold ‘Cocktails for Ukraine’ events around the UK, with “at least £2 for each cocktail going to the appeal in addition to the proceeds from ticket sales”, it said.

Russian Standard Vodka, for instance, was removed from Tesco, Sainsbury’s, Asda, Morrisons, and the Co-op.

Beluga Vodka also disappeared from Waitrose and Harvey Nichols. When approached by The Grocer, its UK distributor Speciality Brands confirmed it had “ceased all support for the brand for the foreseeable future”.

Halewood Artisanal Spirits in March unveiled plans to move production of its JJ Whitley vodka brand from Russia to the UK.