Aldi to swap plastic for cardboard trays on steaks 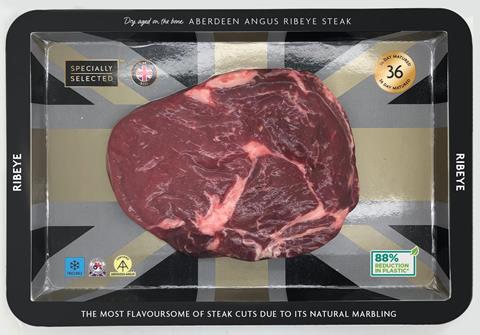 The cardboard trays are sourced from sustainably-managed forests and recyclable once a film base has been removed, according to Aldi

Aldi is to introduce new cardboard trays for steaks in a move it says stands to save 240 tonnes of plastic waste a year.

The new trays are to replace plastic ones for Aldi’s Specially Selected steaks in more than 380 stores in the south east, north west and Wales from early September in a trial.

It would reduce plastic packaging on the sirloin, fillet, ribeye and rump steaks by 90%, Aldi said.

The cardboard is sourced from sustainably-managed forests, and recyclable once a film base has been removed, according to the discounter.

The new trays could be rolled out across the UK estate of more than 800 stores if the trial is deemed a success.

“Both food and plastic waste are important issues, but this packaging delivers on both by potentially removing 240 tonnes of plastic a year without compromising food quality or longevity.”

Aldi said it was a step towards its target of making all own-label packaging recyclable, reusable or compostable by 2022.

The supermarket is also currently trialling five lines of loose veg, and toilet roll wrapped in paper instead of plastic.