Asda embarks on major expansion of its packaging-free refill scheme 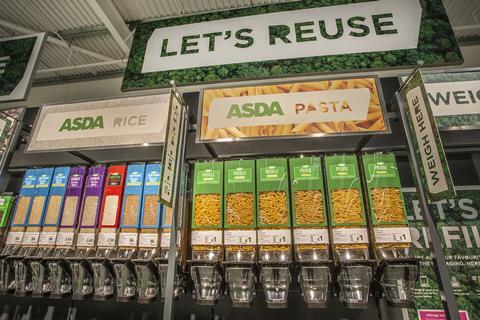 Asda has announced a major expansion of its packaging-free ’refill’ trial, including a rollout of the scheme to four more stores and a raft of new supplier partnerships.

The expansion, after last year’s launch in Leeds, is to include Asda’s biggest refill store to date, opening in October in York and boasting 18 bays of dispensers and over 70 branded and own-label products in refillable format.

It will include dispensers for brands such as Yorkshire tea as well as an increased range of Kellogg’s cereals, new own-label and Nestlé cereals, Napolina pasta and Tilda rice.

The new phase of the scheme also includes a “world first” tie-up with Unilever allowing shoppers to return pre-filled bottles of Radox and Persil to be recycled by the supermarket.

petfood is also being added to the refill lineup with products such as dried Mars petfood brands, Whiskas and Pedigree. New types of snacking, desserts and baking products will also be sold in refillable formats.

A nine-bay fixture will open in Milton Keynes in December.

Asda’s first so-called ’sustainability store’, unveiled in Middleton, Leeds, in October, also features banks of dispensers and weighing machines. Customers are encouraged to bring their own containers or use those provided at the store, instead of buying new packaging.

The store, which had originally been due to open in May but was delayed because of the pandemic, introduced a raft of major UK brands in refillable format, such as PG Tips, Vimto, Kellogg’s, Radox and Persil.

Asda said since the launch, sales of several of the products were outstripping packaged sales. Many customers were travelling from outside the local area to shop more sustainably, it added.

As part of the expansion, Asda is also going to test the effectiveness of placing refill offers in normal category aisles, rather than in a dedicated standalone bay, as it considers plans for a UK rollout.

The strategy will be rolled out at the first refill store in Scotland, Glasgow Toryglen, in August, for cereals, rice, pasta, tea, coffee, toiletry and laundry products. A similar concept will be brought in at its Rugby store, also in August.

All four stores will feature Persil, Radox, Simple and Alberto Balsam products from Unilever in stainless steel reusable bottles. These will be tested in two refill formats: refill on the go and a tie-up with Unilever where shoppers can pick up pre-filled bottles off the shelf and return them in-store once used.

“We know that reducing packaging waste matters to our customers and they have embraced the refill options available at the Middleton store, with many of the products available already exceeding expectations,” said Asda director of commercial sustainability Susan Thomas.

“Our ultimate goal is to make refill and reuse a part of every Asda shopping trip and to achieve this we have to make it easy, accessible and affordable for all our customers to shop this way.

“Middleton was a great introduction to how customers engage with refill products and we are now looking to accelerate these learnings by trialling different refill options in more stores to understand which aspects can potentially be developed further.”

Unilever executive VP Sebastian Munden said: “Asda share our ambition and urgency to tackle plastic pollution, so it’s great to scale up our partnership with them and continue to test different refill models in their stores.

“This includes our first-ever trial of reusable stainless steel bottles, which are available pre-filled on shelf and then dropped off in-store once used. By testing and learning what works best in-store, we can understand how to make it as easy as possible for shoppers to make sustainable choices, whilst still using the brands they know and love.”