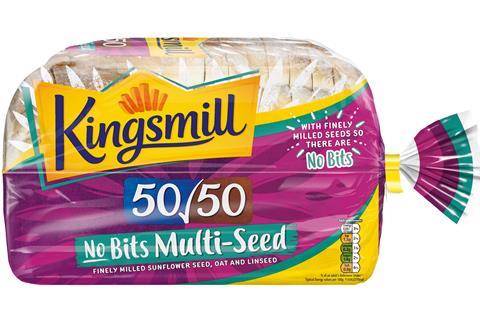 Kingsmill is adding to its 50/50 range with a duo of “unique fusion” loaves.

It is adding two seeded loaves to the 50/50 range – made with half white flour and half wholemeal flour – a move it claimed represented a “never-before-seen proposition” for bread shoppers.

The duo would create “an entirely new fusion area of bread,” said Kingsmill, and had been developed in response to the growth of healthier white bread, which it claimed was driven by its own 50/50 loaf, and the growth of seeded bread.

Kingsmill said the new SKUs would broaden the appeal of seeded bread to families, a shopper group it said currently undertraded in the seeded category.

The bits and no bits options would bring “a new level of choice to the market”, it added.

The launch will be supported by a “major” marketing campaign spanning TV, radio, OOH, digital, PR and influencer support, and the loaves will also feature as part of Kingsmill’s sponsorship of The Simpsons on Channel 4 and All 4.