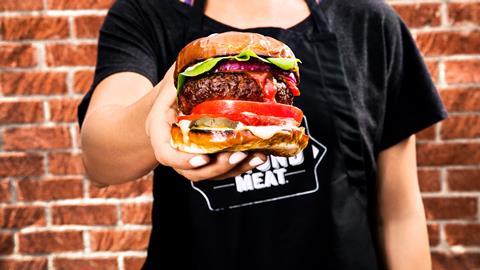 The fast-growing California company is upping its ambitions in Europe with new facilities. Chief growth officer Chuck Muth sets out its plans for domination

Beyond Meat certainly isn’t short of ambition. For chief growth officer Chuck Muth, the aim is simple: “change the world”. It was this lofty goal that persuaded the former Coca-Cola executive to come out of retirement and join the company in May 2017, at the behest of CEO Ethan Brown.

“I met Ethan and we walked around Washington DC for an hour talking about life in general – nothing business – philosophy, sports and whatever came to mind,” recalls Muth. “At the end of the hour he handed me a piece of paper and said, ‘I want you to come down to California, we’re going to change the world’. And here we are.”

Here we are indeed. Muth is clearly passionate about Beyond Meat – and with reason. It has made serious waves in the meat alternatives market, valued at an eye-watering $13.4bn last summer following its listing on the NASDAQ.

Now it’s embarking on its next phase in world domination: putting down roots in Europe. Having completed work on a new factory in the Netherlands, it last week announced the acquisition of a second site dedicated to product innovation. For Muth, the factory is a “milestone” in the company history. “It’s the first facility outside of not just the US but Missouri,” he points out. “So it will have a big impact.”

The first, most obvious impact will be on supply. “It will give us capacity here in Europe and speed up the capabilities of getting to market,” says Muth. Buoyed by that extra capacity, Beyond Meat is now looking to expand its presence in the UK – it is currently listed in Tesco, Ocado and Holland & Barrett – and is “talking to other retailers”.

The facility will also ensure a strong range. “Our intention is to bring whatever we bring out in the US to Europe,” says Muth. Mince is one product he wants to bring to the UK audience. And he is keen to go beyond beef. “I imagine over time pork and chicken will become big markets for us in the UK,” he adds.

Finally, a Netherlands site will bring down its cost of production outside the US. “We know cost has been an issue for our brand so having facilities here will absolutely help us in that respect to make it more affordable,” he says.

Affordability is, indeed, a crucial point. At its outset, Beyond Meat was largely unrivalled. Muth recalls the first time he tried the patty. “I had eaten veggie patties before but they didn’t come close – they didn’t try to taste like meat – so it was unique.”

That uniqueness meant it could easily command a premium. But times have moved on. “Because we had success with the burger in the US, companies wanted to replicate that quickly,” Muth admits.

Today, a number of vegan burgers carry a similar promise in the UK, from Iceland’s No Bull to Meatless Farm Co. And many of these undercut Beyond Meat. In 2018, the brand arrived in Tesco with a price of £5.50 for two quarter pounders. That represents a hefty premium on SKUs such as Tesco’s Plant Chef range, introduced last year as an affordable vegan offering, which comes at £1.50 for two meat-free burgers.

Muth admits high prices can be off-putting for shoppers. “Price is a barrier, sure,” he says. “We will continue to drive that down and opening up production in Europe is a big part of that.” Indeed, the goal is for its products to cost “the same as meat or even less” in the next four or five years.

But price isn’t the only consideration. Taste is crucial in the meat alternatives market – and here, Muth believes Beyond Meat is at an advantage. “We invest a lot in R&D to make them taste good [the recipes undergo constant upgrades] and the ingredients we use are quite costly,” he says. A Beyond Meat patty is 16% pea protein, and includes ingredients such as pomegranate extract and coconut oil. Compare that with Tesco’s Plant Chef burger, which contains more palm oil than pea protein, and it’s easy to understand the cost difference.

Muth stands by that strategy. Unless the product delivers on taste, Beyond Meat won’t be able to fulfil its overarching aim, he argues. “You don’t change the world by convincing vegetarians and vegans to eat less meat. You do that by convincing meat-eaters to eat less meat,” he stresses. “So creating products that appeal to them and don’t feel like a sacrifice has really been our focus and objective, and we will continue to work in that direction. If we can make a product that tastes just as good as an animal counterpart, that is nutritionally better, and better for the environment, what is the objection to eating that product?”

There are some objections, of course. One has been the amount of processing involved. Beyond Meat contains no fewer than 17 ingredients, which hasn’t gone down well with the clean eating brigade. On this point, Muth is pragmatic. “I think most foods we eat are processed in some way. Even animal products are processed,” he points out. “If you’re eating a whole food diet that’s wonderful, and we applaud that, but that’s not realistic for most people. So the question then becomes, what’s in the process? We use only plant-based materials, there’s no GMO, no soy.”

Another objection has been the decision to site its products in the meat aisles, which has earned criticism from veggie shoppers who don’t want to visit that area. Again, Muth bats off the argument. “We think it’s a very, very small minority of vegans and vegetarians,” he says. Plus, he points out that Beyond Meat is designed to convert meat-eaters “who shop in the meat section”. So for Muth, it all comes back to Beyond Meat’s core aim: “If you want to change the world, this is the way you’re going to do it.”