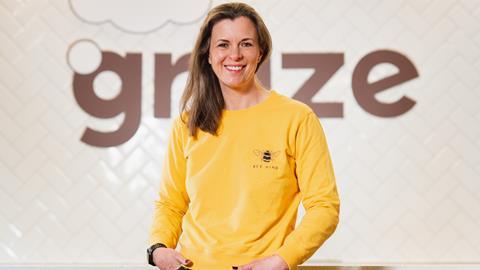 Joanna Allen big interview: how Graze’s CEO is taking a big bite out of snacking

Nearly a year into her role, Graze’s Joanna Allen still hasn’t met her team in person. But that hasn’t stopped her setting out big ambitions for the brand

Six months into her role at the helm of Graze, Joanna Allen discovered a new CEO would appear in the brand’s TV ad. It could have been an awkward conversation with the brand team. “I was a little bit, ‘Can we talk about this?’ I’ve only been here six months, guys! It feels a bit premature,’” she recalls.

To Allen’s relief, it turns out the CEO was, in fact, the ‘chief eating officer’ – the squirrel character fronting Graze’s TV debut. That Allen can openly laugh about the incident is testament to what she describes as an “incredibly welcoming” team at Graze. Of course, she’s yet to meet any of them in person – she joined in June, just three months after the first national lockdown. Yet she’s already adjusting to the “work hard, play hard startup dynamic” that seems to have survived the brand’s 2019 acquisition by Unilever.

As someone who has built her career in big corporates – Allen joined from a five-year stint at Unilever and, prior to that, was at Coca-Cola for nine years – she welcomes the change. “I guess the agenda I want to drive is how do we take the advantages of being part of the Unilever family and continue to cherish what’s really special about Graze,” she says. “So there’s a real opportunity to selfishly take the best of both worlds.”

Covid restrictions aside, it’s arguably a good time for Allen to implement this strategy. As illustrated by its TV debut, the healthy snacking brand is feeling confident about the future. And understandably so. Partly by chance, the brand has found itself well positioned to take advantage of shifting consumer habits.

“It doesn’t have to be tasty deliciousness or good nutrition, it can be both”

For starters, its founding DTC premise has come into its own. While Allen admits Covid has “definitely impacted” impulse sales in retail, Graze has been able to fall back on a well-established e-commerce operation. “What we’ve seen is an uptake in our sign-up numbers with a new audience who maybe didn’t experience Graze back in the late 2000s,” she says.

To capture that shift, Graze pivoted its production to focus more on DTC sales. The net result has been what it describes as “mid-single digit revenue growth” for the year to date – a pace that is venturing back into double-digit territory as Covid restrictions ease.

Another factor in its favour is the government crackdown on HFSS foods. As a brand that prides itself on health credentials – an ethos that helped it secure B Corp accreditation in February – Graze is well-placed to mop up any backlash from sugary treats. It’s already talking to retailers about how their planograms will look once the promotional restrictions come into force.

“You just constantly want to communicate to people that they don’t need to make this unnecessary compromise in snacking,” Allen stresses. “It doesn’t have to be tasty deliciousness or good nutrition, it can be both.”

With these macrotrends on her side, Allen is now turning her attention to what she describes as “fairly hefty growth ambitions”. Despite DTC winning the pandemic, retail remains a core part of these.

The best business advice I’ve ever been given: Hold others to account to the same degree that you hold yourself

Graze is now looking for opportunities outside the big supermarkets. When it comes to the big four, the brand wants to be “not just in the main estate but in the Expresses and Locals”. The discounters are another avenue of growth, alongside independent convenience stores. “If you walk into a village shop, which so many more of us have done throughout the pandemic, your snacking choices might be a bit limited,” Allen says. “So it’s making sure the brand is available there.”

Innovation is a key area of focus, too. The brand has continued its NPD push during the pandemic with products such as a (typically divisive) Marmite Crunch. Allen stresses that Graze can turn around new products “very quickly” even in tough conditions such as these. “A lot of our NPD team have literally been doing very early stage development in the kitchen,” she says.

As restrictions ease, Allen wants to up the pace and respond to the demands of its famously vocal consumers. “One of the things fans of the brand are always telling us is, ‘We’d love to see you in these new snacking categories’. So again, we have big ambitions for how much more we can do with the brand.”

That’s illustrated by its debut in the cake bar category this week with Wow Bakes, designed “for that moment in the afternoon when you’re grabbing a cup of tea and want a sweet indulgence”. Looking further ahead, the collaboration seen in its Marmite Crunch product holds a clue to the direction of travel. Allen doesn’t rule out working with other Unilever brands on NPD, but first she would like to explore tie-ups with fellow B Corps. “That’s certainly something we’ve got in the works.”

Then there is the matter of international expansion. Graze got burnt by its foray into the US, which it exited in 2019 – resulting in revenues falling by nearly a fifth that year to £37.4m. But Allen is adamant that won’t dampen its growth ambitions.

“The US really was a great learning experience for Graze as it was the first time we’d taken the brand internationally,” Allen insists. “It’s a much more mature market when you look at nutritious snacking. And the feeling after the acquisition was that maybe it was a bit too mature for Graze to really make an impact in, and our resources would be better placed if we put that into markets that were a bit more immature.”

Cue the debut of its DTC offering in the Netherlands and Ireland last year. Having seen a “really exciting” consumer response, Graze has since gone into retail in both. Allen believes there are plenty more places where the brand could work – in essence, anywhere with a growing interest in nutritious snacking that hasn’t reached saturation point.

“One of the things I ask my brand team more than anything is: ‘What’s the problem you’re trying to solve for a person?’ Because if you’re genuinely solving that in a way that’s really distinctive, there will always be a market for the brand,” she says.

Luckily for Graze, there is no shortage of problems to solve in the snacking world. The brand may appear to be in the right place at the right time, but Allen acknowledges the market is “unpredictable” – meaning strong leadership is more vital than ever.

So it looks like Allen needn’t worry about that rival squirrel CEO just yet.