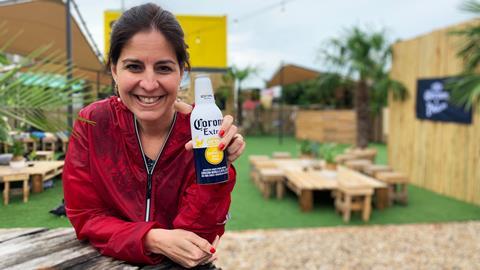 Paula Lindenberg is sitting in a makeshift hut on Brighton beach, and the rain is lashing down - so much for the British summer. Seagulls screech and squeal as they flock around us. The rain is making it virtually impossible to take notes.

I’m not sure this is what AB InBev - or Budweiser Brewing Group as its UK business is now called - had in mind when a Friday afternoon meet and greet on the beach, where the brewing behemoth is running a Corona-branded beach-clean, was proposed.

Still, it’s refreshing to meet somewhere that isn’t a polished office, or a pricey London bar. In fact, there’s a lot that’s refreshing about Lindenberg, who took up the reins of AB InBev’s UK operations as its new president in January.

After starting out in marketing at the likes of J&J, Unilever and Philip Morris, Lindenberg moved to AB InBev 18 years ago, holding marketing, branding and insight positions in Ecuador and New York, before returning home figuratively and literally as VP of marketing for Ambev in the country of her birth: Brazil. “My main expertise, my strongest arm, has always been understanding consumers, how they engage with each other, what they choose, and then trying to build brands that fulfil those needs.”

AB InBev clearly has a preference for promoting marketers, rather than salespeople, into top jobs. Jason Warner, her predecessor under whose tenure the company overtook Molson Coors to become the UK’s second-biggest brewer, was a marketer too.

Best business advice received: Focus on where the growth is coming from. Some people think it’s great to be a specialist in one function or area, but I think going outside your comfort zone and being open to new experiences is what’s going to take you further.

Last meal: BBQ with beer and lots of friends. It’s not about the meat or the food, it’s about the mindset and the mood.

If I could share a beer with one person: Gilberto Gil. He’s a Brazilian musician. I grew up, learned to date and party, all listening to him. He’s been a big part of my life.

Since taking on the UK role, Lindenberg’s been busy overseeing a major rebrand of the UK business, changing the name from AB InBev to that of its fastest-growing brand (Budweiser added an insane £43.8m to its value over the year ending 20 April 2019 [Nielsen]). Meanwhile its HQ migrated from a nondescript business park in Luton to a swanky new Shoreditch base.

Lindenberg says this is all about making the brewer “more recognisable” and making it easier for retailers - and importantly on-trade businesses, with whom it is less embedded - to engage with it, as it looks to knock Heineken from the top spot in the UK beer market.

So is it going to beat Heineken this year? “I’m certainly going to work hard for that,” she says. It’s by no means impossible, given the performance of Budweiser Brewing Co’s biggest brands over the past year. As well as the massive boom for Bud, Stella added £40m while Corona added £21.5m in value in the off-trade this past year [Nielsen 52 w/e 20 April 2019].

That’s not to say there aren’t parts of its portfolio that aren’t working - Beck’s is in a significant decline, for instance. But the likes of Stella and Corona’s recent good fortunes mean Beck’s isn’t a huge priority.

In essence, Budweiser Brewing Group doesn’t need to worry about the supermarkets (apart from maybe Waitrose, which has ditched several of its main brands to make room for craft beers recently), where it’s already number one.

Rather, it’s Britain’s pubs and bars where its next battle with Heineken will be. And given Heineken owns thousands of pubs, this will be no small feat. “We’re very strong in the off-trade but when it comes to brand equity we see that our brands have more equity than distribution in the on-trade,” says Lindenberg. “Our share of desire today is bigger than our market share.”

Which helps, in part, explain why Budweiser Brewing Group is seeking greater visibility for itself as an entity, rather than the brands on their own.

But there’s more to the recent slew of changes than that. Behind the scenes the business is changing the way it approaches its core brands and getting more experimental with NPD and innovation.

It has, for instance, created a standalone division, dubbed DraftLine, its own in-house creative agency, covering digital content production and media buying as well as “real-time social listening and responding”.

DraftLine has been stacked with hires from production companies, in-house studios, digital media publishers and TV networks. And the plan is for it to double its staff count by the end of the year. “Their scope is to listen to what’s happening on social media and to help us to find ways to connect our brands’ point of view to what people are actually talking about.”

It’s early days, but DraftLine has already created a major national campaign for Budweiser, called ‘Heart of a King’, which ran alongside the Women’s World Cup, drawing on the famous speech by Queen Elizabeth I and featuring stars such as actor Naomie Harris and singer Jessie Ware.

“We are aiming to bring more pilots to market so we can learn, or fail, or scale up faster”

BBG is also changing its approach to bringing new products to market. “We are piloting more and aiming to bring more pilots to market so we can learn, or fail, or scale up faster,” says Lindenberg. The UK, she adds, “is a very interesting market to do this in because of the amount of income available”.

Much of this is happening through ZX Ventures, AB InBev’s incubator arm. And some of it isn’t even happening in the beer category. Take ‘Sincerely Sabella’, the blood orange spritz RTD it quietly launched last month, eschewing the months of marketing and brand testing that usually go into a new product launch, opting to let the market decide whether it works or not.

“We are piloting draft cocktails with them, we’re piloting energy drinks - it’s a way for us to learn about trends and help us pilot test what’s working,” says Lindenberg. “Then one day we can scale it up with the big machine.”

Meanwhile, Budweiser Brewing Group’s craft offer continues to grow. But rather than buying new brands, recent acquisitions - such as distribution service Beer Bods and much of recently collapsed retailer The Bottle Shop’s assets - focus on boosting retail and distribution capacity.

Does all this mean Budweiser Brewing Group might one day be considered a drinks company rather than just a brewer?

“Look,” says Lindenberg. “The consumer is the boss. And I don’t know if serving the consumer means we have to go outside beer. But yes, it is something we’re experimenting on.”