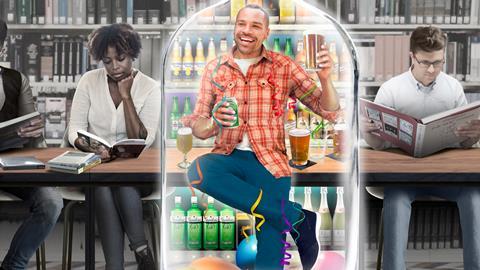 Millennial moderation seems to be the order of the day, inspiring a raft of ‘NoLo’ booze launches. But that doesn’t account for the extra 136 million litres of alcohol sold in the past year. So what’s behind the rise in sales? And has the concept of a strait-laced generation been overhyped?

It’s the year of the snowflake! The catch-all sneer has become tabloid shorthand for a younger generation that seemingly just can’t take a joke. Or handle a pint, if you believe all the rhetoric around moderation.

Indeed, the tidal wave of low and non-alcoholic drinks hitting the market suggests ‘moderation’ is the new black. Their stellar growth - Heineken 0.0 has more than doubled its value to £9.8m [Nielsen 52 w/e 20 April 2019] - only serves as further proof.

With all this talk of generation sensible, you could be forgiven for assuming the drinks industry was struggling. Except it is, in fact, booming: the UK’s 100 bestselling booze brands have added a combined £752.4m in sales this year, raking in a total of £10.2bn. That’s an extra 136 million litres of booze this year alone. And of those top 100 brands 67 are in growth, many making double-digit (or even triple-digit) gains. It hardly seems a sign of moderate consumption.

So why are we constantly being told Brits are packing in their drinking? How are we supposedly taking a healthier, less all-guns-blazing approach to alcohol consumption while splashing millions of extra pounds on booze?

Admittedly, last year did benefit from some unusually favourable conditions. There is obviously the matter of the World Cup. England’s shock success in getting to the semi-final skews this year’s figures, especially for beer brands like Stella, which racked up an additional £6.7m over the tournament. Or Heineken, which pulled in the largest gain of any beer in our top 100 ranking. That the summer of 2018 was one of the hottest on record helped too.

This year could prove a reality check. Indeed, Pernod Ricard commercial director Chris Ellis says brands that benefited from the football and sunshine-heavy 2018 will likely struggle when it comes to next year’s comparative results. Especially given the miserable rainy spell that blighted this June.

But last year’s boom in booze sales is far more than just a blip. The industry is “vibrant and buoyant” as a whole, stresses Ellis. And he’s not the only drinks boss talking about “reasons to be cheerful” for BWS.

Premiumisation is one such reason. Even if shoppers are drinking less in terms of quantity, that doesn’t mean values have to fall. ‘Less but better’ has become the norm, with shoppers demonstrating - despite plummeting consumer confidence and the threat of economic shock from Brexit - that they’re still willing to splash out an extra few quid on quality. Which explains why Yellow Tail and Barefoot are the biggest winners in wine in this year’s ranking, having positioned themselves as just a little bit above the likes of Hardys and Blossom Hill. Or why Birra Moretti has more than doubled its value despite costing a wallet-busting £3.09 on average per litre.

Still, it’s not all about people buying less but better. There is the small matter of an extra 136 million litres in sales to square. William Grant & Sons UK & Ireland MD Neil Barker believes consumers are not cutting back as much as headlines suggest. “Yes, people are much more aware [about wellness] but that doesn’t mean they’re not consuming alcohol,” he argues.

Indeed, an exclusive poll for The Grocer by Harris Interactive suggests young consumers are still knocking back the booze. More than six in 10 of the 18 to 34-year-old age group drinks alcohol once a week or more, found the poll of more than 1,000 consumers. That’s marginally higher than the supposedly wine-swilling over-55 age group, of which 59% fell into this bracket.

The difference is that younger consumers are changing what they do drink. Not only are they gravitating towards more premium lines, they are also demanding a higher level of innovation. Nearly four in 10 of the 18 to 34-year-olds in our poll said they liked to try out different drinks and flavours, compared with just 12% of the 55-plus age group.

“There is a real willingness from consumers to experiment and try new innovation more than they have in the past,” says Barker. Concha y Toro’s UK general manager Simon Doyle also believes “there is much more of an appetite to do new things and find new points of difference”.

Diageo has shown how powerful a new flavour can be. Gordon’s Pink, launched not even two years ago, is almost single-handedly responsible for the gin brand’s tremendous success (it’s the fastest-growing brand in this report). There are plenty more examples where that came from. Whitley Neill became the second-biggest gin brand this year thanks to its innovative Rhubarb & Ginger and Parma Violet lines. And Baileys has sold a whopping £11.9m of its new Strawberries & Cream line since launching last May.

Admittedly, some of the NPD turning heads is the kind that appeals to the moderation trend. Recent innovation from the big boys of booze has come with less of a kick. Diageo, for instance, is throwing its weight behind a new 30% abv Ketel One ‘Botanical Vodka’ range and has taken Smirnoff into lower-alcohol with its Infusions range.

There does seem to be demand for this type of fare. Pernod Ricard’s Ellis confirms “conversations with customers have changed” and “they’re almost pushing us” to create lower-abv products.

That has turned around previously unviable propositions like Pernod’s Brancott Estate ‘Flight’ wines, which come naturally around the 9% mark. They returned to the market this year for the first time since 2015, to cater for drinkers looking for a lower abv.

And more light ‘spritz’ style RTDs have come on to the market over past months than you can count. Kopparberg, for instance, launched Balans, an ‘aqua spritz’ (essentially boozy sparkling water) into sleek cans early in the year. Meanwhile, Treasury Wine Estates has launched a new bottled ‘Gin Fizz’ for Blossom Hil. Much of this is inspired by the massive success of Aperol Spritz in the on-trade - the Campari-owned apéritif has taken pubs and bars by storm, though it’s not big enough in retail to make this list.

Stuart Ekins, MD of Cask Liquid Marketing, says these longer, mixed drinks create a perception “from a dilution point of view that your alcohol intake isn’t quite the same as some of the more traditional drinks”.

These lower-abv drinks aren’t just on trend. There’s also a financial incentive: you pay less duty. Which, combined with the fact that shoppers are happy to splash out on a perceived premium experience, makes it a no-brainer. This extends into the booming low and non-alcoholic (or ‘NoLo’, as it’s commonly dubbed) category. As a trend, it is taking the supermarkets by storm at a speed that is reminiscent of the early days of craft beer. After all, there’s no duty at all with no booze.

“I think a lot of it is driven by margin. Everyone is amazed that there’s no duty on it and they can still sell a bottle for £20”

NoLo beers are already racking up huge gains across the top 100: Heineken 0.0 has almost achieved sales of £10m since its launch. Budweiser Prohibition is approaching £3.5m. And spirits are next. Seedlip, backed by Diageo, is the market leader by a huge degree, but new entrants are steadily hitting shelves, such as Pernod Ricard’s Ceder’s, or William Grant & Sons’ Atopia, which launched a matter of weeks ago.

But there are serious questions about the pricing of these spirits, many of which cost as much as - if not more than - alcoholic fare.

“I think a lot of it is driven by margin,” says Cask Liquid’s Ekins. “Everyone is amazed that there’s no duty on it and they can still sell a bottle for £20.” William Grant’s Barker disagrees. He says it’s down to the costly nature of the innovation. “It’s actually quite a difficult technological area to get to in terms of distilling something [with no alcohol] that tastes good.”

Indeed, Claire Warner, MD of new brands at Seedlip, previously told The Grocer the NoLo beacon brand didn’t need “to defend” its price point. She stressed the quality of the ingredients and the complexity of its production process.

That consumers are willing to splash out upwards of £20 on a spirit that contains no alcohol is a sign that the moderation trend is isn’t a complete myth.

But as this report shows, Britain’s biggest (actual) booze brands are largely in good shape. NoLo drinks have made gains, yes, but those gains are minimal compared with how the alcoholic stuff is selling. So though Brits may be cutting back a little, they are by no means turning away from alcohol any time soon.

The gin boom is once again a major influence behind the biggest booze winners. This year, it’s all about new variants. Gordon’s Pink was the driving force behind its gargantuan £156.6m gain, and Whitley Neill jumped 79 places in our ranking thanks to unusual variants such as Rhubarb & Ginger and Parma Violet.

The World Cup was another factor giving brands a boost - and beer brands especially. It drove massive gains for Heineken and the official beer of the tournament, Budweiser. Sadly the World Cup didn’t deliver the same gains for Carling, the third fastest-falling brand, which suffered from mass delistings of its cider range.

Speaking of cider, Strongbow played a blinder with its Dark Fruits variant, now worth £136.7m. It’s at the forefront of the boom in fruity ciders, which has also driven gains for Kopparberg and Old Mout.

It’s no coincidence that three of the five fastest-falling brands were wines. Affordable brands are losing ground to slightly posher plonk such as Yellow Tail and Barefoot, as consumers drink less but better.

Blended scotch lost ground to imported whiskey. Neither Grouse nor Bell’s did well.