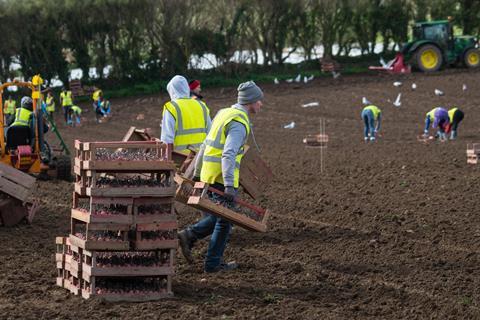 Concern over labour availability for the start of the UK picking season is mounting among UK fruit & veg growers, amid Europe’s latest Covid-19 wave and a lack of clarity from the government on the Seasonal Agricultural Workers Scheme pilot.

While daily infection rates have hit their peak in most European states over the past week, thousands of new coronavirus cases have been recorded in key countries for recruitment, such as Bulgaria and Romania, over the past week, according to Reuters. In other countries, like Ukraine, infections are also rising steeply.

This situation had exacerbated issues for seasonal workers travelling to the UK for the early part of the picking season due to confusion surrounding quarantine and testing requirements, according to both the NFU and British Summer Fruits.

NFU Horticulture & Potatoes Board chair Ali Capper said she had heard of “handfuls” of incidents at the UK border due to confusion over the exemptions for seasonal staff.

For example, despite the government pledging free tests for farms employing seasonal labour to help them meet the days two, five and eight testing requirements, Capper said some workers had been required to book these tests at the border, which had added “huge anxiety and costs” for workers and employers.

“My concern is when the big numbers start to flow through from May onwards, if we’re seeing the same percentage [of issues at the border] then it could be very disruptive,” she said. “One hopes as time goes on that border staff will become clearer on the rules and exemptions.”

BSF chairman Nick Marston added that misunderstandings at EU borders had been “widespread” and had caused some people to fail to make it to the UK altogether – a situation worsened by the government’s requirement for international arrivals to have had negative Covid test results 48 to 72 hours before travel, and to fill in a passenger locator form – a track and trace document – under 48 hours before arrival.

According to Marston, these rules were proving “quite hard” for the many workers who travelled to the UK by coach as it took “more than two days” for those travelling from rural Romania, for example.

Meanwhile, with just weeks to go until the UK harvest season kicks off, growers remain in the dark over the identity of the two additional labour providers the government has appointed to run the extended SAWS pilot alongside Concordia and Pro-Force.

As The Grocer first reported in January, there was already nervousness across the industry at the government’s timetable for appointing the new firms, which it said might not be officially licensed by the Home Office until June – the peak of the UK season.

Despite Defra secretary George Eustice promising an announcement from the Home Office “shortly” at the NFU Conference back in February, there has been no further official news – although it is understood the operators have been approved.

It has left growers unsure as to how they will recruit enough workers in time for the beginning of the season.

One major fruit business told The Grocer the delay was eroding confidence amongst its grower base.

“Four weeks ago we spoke to a number of our growers and there was a high level of confidence everybody would have the labour they needed,” the source said.

“That confidence is now waning. There are a number of people already in the country so people have generally got the staff they need at the moment. [But] we’d obviously have liked [the SAWs announcement] a little while ago. I’m not sure how they’re going to make it work so quickly.”

A Defra spokeswoman said the department would “always back our farmers and growers to ensure they have the support and workforce they need”.