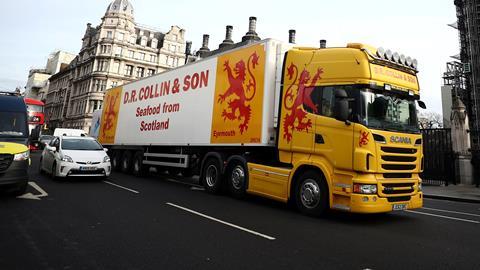 Seafood exports to the EU have all but ground to a halt, with suppliers urging a six-month ‘grace period’ to cut red tape

The last thing seafood companies need right now is more paperwork. But that’s what they got this week when police handed out £30 fines to those who travelled to Westminster to protest over post-Brexit export delays.

While not deemed ‘essential’ under lockdown rules, however, the trip was arguably worth it for Scottish processors. In the wake of the protests, Defra pledged £23m to support businesses affected by the huge loss in seafood exports to the EU since the new trade deal came into effect on 1 January.

So, why has the seafood sector been hit so hard by Brexit? And will the government handout help solve its problems?

When the Brexit transition period ended on 31 December 2020, the UK’s seafood sector was already reeling from the impact of Covid-19 on foodservice in the UK and across Europe. According to data from Seafish, exports of seafood slumped 20% in value terms in January to September 2020 vs the same period in 2019.

Since then, Brexit-related delays, bureaucracy and IT issues have conspired to bring seafood exports to the EU to almost a complete halt.

The Scottish industry has been hit particularly hard because it lands and processes the UK’s largest amount of popular export species, such as langoustine, salmon and monkfish. The highly perishable nature of its products means it is also particularly reliant on seamless trade – something the last-minute trade deal with the EU didn’t deliver.

“It was like going from fifth gear to first gear when you’re bombing down the outside lane on the motorway at 70mph,” says Alistair Carmichael, Lib Dem MP for Orkney and Shetland. “It is frankly ridiculous to think you would sign a trade deal on 24 December and just make that work seamlessly on 1 January.”

One of the biggest problems has been the sheer amount of extra paperwork required to export fish and seafood to the EU under the new trade deal, which is causing delays on both sides of the border.

Allan Miller, owner of AM Shellfish and one of the protesters at Westminster this week, estimates it now takes an additional 30 hours to send a lorryload of live shellfish to customers in France and Spain.

“I have to have all the orders sorted, prices agreed, customs entries in, catch certificates saying how many kilos from this boat and how many from that boat. It’s crazy the amount of time it takes to do that and then to get the paperwork all on to the lorry,” he says.

There has also been significant confusion and inconsistency in the enforcement of the new rules. According to trade body Seafood Scotland, lorries have been rejected due to paperwork being filled out in the wrong coloured ink, or because they had not numbered document pages in the correct style. Meanwhile, paperwork completed in an identical way is being passed at one port but rejected at another, it claims.

Inadequate IT systems have caused further problems, with reports of the customs website crashing and lorries missing boats because of system delays.

Paperwork: Businesses are bogged down with catch certificates and customs declarations.

Time: Improving the system or negotiating a new one with the EU could take too long.

Groupage capacity: There remains a lack of capacity as SMEs have been reluctant to export to the EU.

Covid-19: Behind it all, firms have already been financially weakened by a drop in foodservice demand from both domestic and European customers

Faced with high levels of shellfish mortality due to delays, Miller was forced to pause operations last week. “I’m throwing away money left, right and centre,” he says. “It can’t go on.”

He’s not alone. The Scottish sector is now facing an “urgent” situation amid soaring losses amounting to upwards of £1m a day, warns Seafood Scotland.

The impact has reverberated down the supply chain, with a third of the Scottish fishing fleet forced to remain in port as the price of some species crashed by up to 80%. Some of the boats that have ventured out to fish are now landing catches directly in Denmark to dodge the chaos at UK ports.

With the situation still looking grim for seafood exporters, the £23m government fund was welcomed by the sector. However, it’s a “sticking plaster” rather than a long-term solution, according to Fordyce.

What the sector really needs, industry figures argue, is a six-month grace period during which time seafood would be waved through customs by the EU. This would allow time for the government to iron out IT issues, while also giving firms a chance to acclimatise. “This cannot be done while it is live,” says Fordyce. “With some breathing space, the system can be fixed and rebooted and companies will then be able to keep moving.”

Unfortunately, such a move is not in the UK government’s gift to grant, with the EU controlling the customs levers.

Carmichael argues there is an incentive for the bloc to act given it is a major customer for UK seafood products. But he warns it would require the UK to show contrition and go back to Brussels for negotiations – a move he is not optimistic this government will make.

Carmichael also says the Scottish government needs to play its part as Food Standards Scotland shares “some of the culpability for the delays” after insisting on checking whole loads rather than random samples where a mistake in paperwork comes to light.

“I’d have thought some checking would be in order, but that if it disclosed no food safety concerns then the consignments could be freed up.”

There were some glimmers of hope this week, with logistics firm DFDS restarting its groupage operation – a key channel for SME exporters – from its hub in Larkhall on Monday (18 January), having solved IT issues, trained up extra staff to handle customs documentation and cleared a backlog of loads.

But with export delays still widespread, the industry’s future remains on the line.