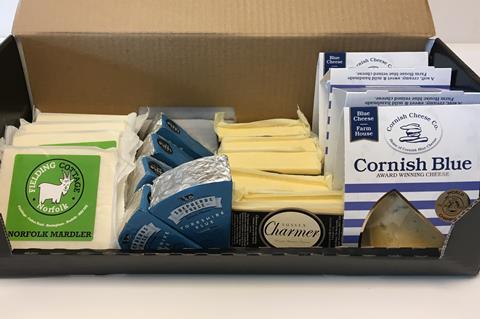 Close to 32,000 packs of cheese originally destined for foodservice or supermarket deli counters will be made available as Specialbuys in Aldi

Aldi has sought to help British artisan cheesemakers affected by the coronavirus lockdown by buying up four tonnes of surplus cheese.

Going on sale from Thursday (23 July), close to 32,000 packs of cheese originally destined for foodservice or supermarket deli counters will be made available as Specialbuys at the discounter.

“Aldi is committed to supporting farmers, growers and suppliers throughout the UK, which is especially important during these difficult times,” said Julie Ashfield, Aldi’s national MD of buying.

“Cheese is a staple product on most people’s shopping list, and we hope our customers enjoy these high-quality cheeses knowing they’ve helped small British businesses when they needed it most.”

In June, The Grocer reported the Cornish Cheese Co – which makes the Cornish Blue Aldi will stock – had teamed up with food waste app Too Good To Go after it lost 90% of its business due to the coronavirus lockdown.

Other retailers have made similar moves to help British cheesemakers in recent months. Booths announced it would increase promotions and give artisan cheese greater prominence in-store, while Waitrose launched a special cheese selection box.

In May, the Stilton Cheese Makers’ Association warned that the six producers permitted to manufacture the cheese under European Protected Designation of Origin rules had lost between 20% and 30% in year-on-year sales since the start of the coronavirus crisis.