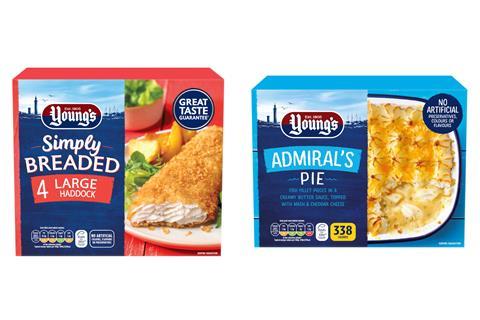 Young’s new look is said to be simpler with sharper colours, fresh photography and a more modern style

Young’s Seafood has unveiled a new packaging design across its core range as it targets a younger customer base.

The new look is said to be simpler with sharper colours, fresh photography and a more modern style.

As well as hoping to entice a younger audience, Young’s said the redesign was also aimed at bringing “warmth and ‘foodiness’” to freezer aisles.

“We believe this new packaging is a vital step in bringing these family favourites to the tables of many more consumers,” said Young’s marketing director Jason Manley.

“Our core range is a £62m brand [IRI 52 weeks to December 2019], so having consistency is vital in order for us to ensure its lasting prominence within its category alongside our successful Gastro and Chip Shop ranges.”

It also follows major changes behind the scenes at the firm. In October, it became part of the newly-formed Eight Fifty Food Group after its acquisition by CapVest-owned meat processor Karro Food Group, with new CEO, former Seachill boss Simon Smith, taking the helm in the same month.