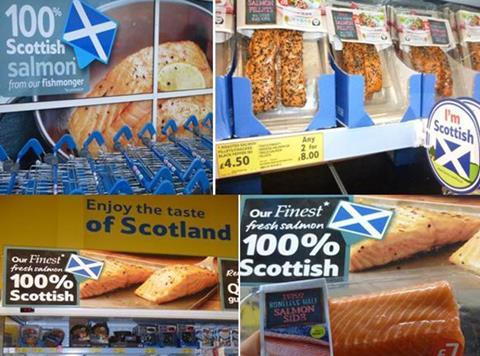 Norwegian farmed slamon was promoted as Scottish in some Tesco stores

Tesco has blamed “wrongly placed” signs for a mix-up that resulted in Norwegian farmed salmon being promoted as Scottish in some of its stores.

Environmental campaigners accused the retailer of misleading consumers by promoting salmon with saltires, flags and “I’m Scottish” flyers in its Scottish stores, when some of the farmed salmon on sale had, in fact, been imported from Norway.

They have urged ministers in Westminster and Holyrood to take action, and reported Tesco’s promotion to Trading Standards and the Advertising Standards Authority. The ASA confirmed a complaint had been received and said it would now assess it.

“By making their Norwegian farmed salmon look more Scottish than Billy Connolly in a kilt at a ceilidh Tesco obviously think they will increase their sales. Tough luck Tesco, Scottish shoppers are not as daft as you think and will see through your scam,” said John Robins, secretary of Animal Concern, which campaigns against salmon farming.

But Tesco insisted it was simply a case of the Scottish signs having been put in the wrong place by mistake. “The products were clearly marked with their country of origin,” a spokesman added. “We are working with our stores across Scotland to make sure only Scottish products are displayed in cabinets that feature Scottish flags and signs.”

However, the campaigners said they were not convinced by Tesco’s explanation. In a joint letter to Defra secretary of state Owen Paterson and Scottish minister Fergus Ewing, Animal Concern and fellow campaign group the Global Alliance Against Industrial Aquaculture said “this excuse does not make sense to us”.

“Apart from the chalk boards the point of sales material is all centrally produced and delivered to the stores with instructions about how it should be used. For so many stores to get it so very wrong at the same time suggests this was more than a coincidence.”

GAAIA campaigner Don Staniford added: “All around the world, salmon farmers and their retailers use misinformation to sell their products. Tartan packs, pictures of Scottish castles and images of salmon leaping in open water are a far cry from the reality of a factory farming industry which pollutes our seas and kills our wildlife. They cannot even be open and honest about what country their salmon comes from.”