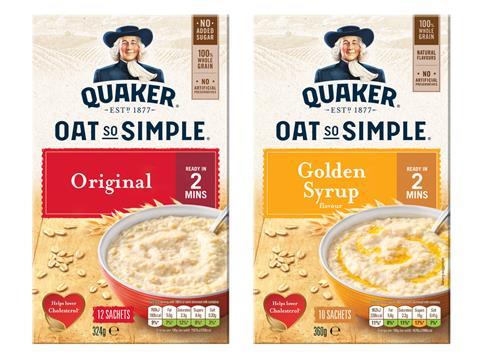 Quaker has reformulated its hot cereal portfolio, removing more than 175,000kg of sugar in a bid to provide healthier breakfast choices.

Marking a “huge step forward”, the reformulation sees the PepsiCo brand’s rolled porridge oats and Oat So Simple sachets and pots cutting calories by more than 700 million per year.

All added sugar has been removed, leaving only naturally occurring sugars from oats and milk powder - though in some instances “a natural flavouring has been added to enhance the sweetness”.

Rolling out from this week, the reformulated Quaker products come in refreshed packs - plans for which The Grocer revealed in May.

The biggest change is to the logo: it has been updated for the first time in six years, with the red background axed and the Quaker Man character given a gentle makeover.

Now was “the perfect time” for the new look, Okell said. “Our campaign later this year will help keep the brand front of mind with shoppers, ultimately leading to increased sales for retailers.”