Will Cheryl’s tie-up with Greggs have the X factor? 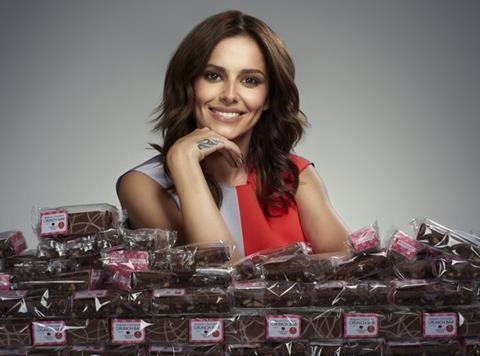 Picture the scene. Exhausted from a day spent judging the screeches of The X Factor’s latest cohort of pop wannabes, the painfully glamourous Cheryl Fernandez-Versini slips out the studio to grab a snack.

It isn’t sashimi, crushed avocado on soda bread, or a kale smoothie that the slight 32-year-old songstress craves, however. Nor is it to relax in the dim lighting and plush sofas of a familiar celebrity haunt.

For Cheryl the destination is high street baker Greggs, where she can kick off her Jimmy Choos and indulge in a sausage roll, bacon butty, or pink iced bun.

It all sounds a bit unlikely, doesn’t it?

Which is why it comes as quite a surprise to learn that Cheryl is teaming up with the chain to launch her own chocolate treat. The ‘Greggs Belgian Chocolate Crunch Bar’ will go on sale in stores from September 8 for eight weeks.

The attraction for Cheryl is easy to understand: with 5p from every purchase donated to her charitable trust, it’s a simple way to generate significant cash with minimum effort. For Greggs it’s more confusing.

There’s no doubt that celebrity endorsement can do wonders for a business, and the food and drink industry is littered with lucrative pairings; Jamie Oliver and Sainsbury’s, Heston Blumenthal and Waitrose, and Mo Farah with Quorn.

But the secret to any successful celebrity endorsement is alignment, and authenticity. Jamie Oliver’s 10-year partnership with Sainsbury’s worked so well because of his credibility as a chef, while Olympic gold medallist Farah teaming up with a healthy brand like Quorn makes perfect sense.

Pop star Cheryl endorsing a product few can imagine she’d ever purchase for herself is far less seamless, and relies on the sheer pull factor of her celebrity alone.

Although one should point out the unlikeliest of pairings have worked in the past. When actress Jane Asher paired up with Poundland in 2013 to launch its bakeware range, few could have predicted the classy Asher could generate sales in excess of £2m for the bargain retailer – its most popular and fastest-selling range to date.

And Warburtons remains hopeful that action hero Sylvester Stallone can help the company shift more loaves since they teamed up earlier this year. Early reactions to the tongue-in-cheek TV ad were positive, though longer-term returns on its investment remain to be seen.

The results of this latest improbable partnership will thus be observed with interest. For much as the power of stardom can boost sales, it can also generate derision from sceptical consumers, not least the tech-savvy, well-informed millennials to whom Cheryl most appeals.

They’ll all be watching keenly via their smartphones to see if Cheryl even takes so much of a bite from her own chocolate bar, let alone sets foot in a Greggs.