I might have to donate to Dispelling the Lies, for a crowdfunded documentary to challenge the attacks on animal foods made in US propaganda. Films such as What the Health, Cowspiracy and Forks Over Knives are winning hearts and minds, shaping the mainstream media’s agenda, influencing government policy, and acting as a recruiting sergeant for the trendy view that a vegan plant food diet is the only way to save our health and planet. 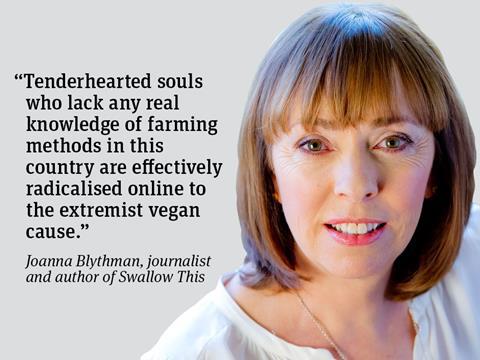 You could describe them as horror films. In What the Health, cheese is described as “coagulated cow pus”, while meat is “pure garbage” of “dead, decaying animal flesh”. Viewers see images of pregnant women with needles poking into their bellies, and fatty, pulsating bodily tissues pierced by scalpels. “An egg a day is like smoking five cigarettes” one medic tells us.

The global effort to turn us off meat, milk and eggs has gone up a gear. In the UK, tenderhearted souls who lack any real knowledge of farming methods here are upset by what they see, and are in effect radicalised to this cause.

US health writer Nina Teicholz, an expert on the use of data, has analysed the 85 pieces of ‘evidence’ in What the Health that support its 37 (ill-) health claims. “Ninety-six per cent of the data does not support the claims made,” she says. The film doesn’t cite a single rigorous randomised controlled trial on humans. Instead it twists weak epidemiological data and case studies on one or two people, and relies heavily on the testimony of vegan doctors.

Back in Blighty, journalist George Monbiot is now arguing a putative environmental case against all livestock production: “Animal farming looks as incompatible with a sustained future for humans and other species as mining coal”. He believes “the mass incarceration of animals, to enable us to eat their flesh or eggs or drink their milk” is mad and wrong. If only he was referring to intensive factory farming, I could happily agree with him, but his crusade against all livestock farming is disturbingly extreme and scarily absolutist. For him, ethical omnivorism is simply a ’charming myth”.

So we really do need to dispel some lies here. Now, where’s my bank card?