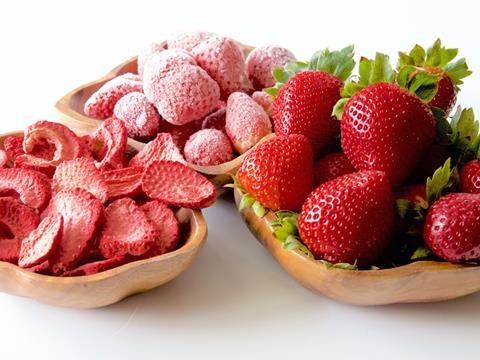 UK-based Chaucer Food Group has appointed a US investment firm to help raise about $70m of expansion capital and provide an exit for the current private equity backers, The Grocer can reveal.

Piper Jaffray has been appointed to find a new investor to take over the stakes of UK shareholders Caird Capital, Endless and HSBC and allow Chaucer to grow rapidly in North America.

The ingredients supplier, which sells freeze-dried fruit & veg to global giants such as Kellogg’s, Unilever, Nestlé and Starbucks, has run out of capacity at its new factory in Portland in the US after increasing volumes to existing customers and winning new contracts.

“We have a significant number of new opportunities in the US and there will be huge growth in the next two to three in freeze-dried fruit, particularly in the snacking sector, as big food businesses transition from unhealthy ingredients to natural and healthy,” CEO Andy Ducker told The Grocer. “Freeze-dried fruit is huge opportunity for confectionery, snacking, cereal and beverage businesses. And there is huge amount of enthusiasm for the natural food space in the US investment community.”

Ownership of Chaucer is currently spilt between the management team, which owns 40% after Ducker and chairman David Manning took control in 2011, and private equity houses Caird Capital and Endless, as well as HSBC. The Grocer reported Caird had bought a 30% stake in October last year from RBS. Endless has been involved with the business for almost four years and HSBC has owned a part since 2005.

Ducker added the likelihood was that a single investor would take a majority stake to support the business for the next five years to expand the factory and sell the new capacity. He also did not rule out a potential trade buyer wanting to snap up the business.

Chaucer is expected to achieve a double-digit EBITDA figure in 2016, valuing the overall business at around $120m (£82m).

Annual accounts for 2015 have yet to be filed but Ducker said revenues had grown about 15% to just shy of $140m with a 50% jump in EBITDA to $11m. However, the acquisition of US brand Crunchies, which gave the group access to Walmart and Costco, and the cost of the relaunch would leave operating profit at $9m.

Growth in 2016 will limited by the lack of capacity left in the US plant but sales should reach close to $155m, Ducker added.

Chaucer also has a bread division based at the Hull HQ and it owns consumer business Premium Snack Company, which is behind the Nothing But, Pane Italia, Hoots and Fru Snax brands, which are in the supermarkets in the UK and have just launched nationwide in Lloyds Pharmacy.

“We have to give the business the opportunity to take advantage of the rapid growth in the natural space, which means we need to put the investment in, build capacity and get the right stakeholders to do that,” Ducker said. “And we need a long-term strategic investor to help grow and expand.”