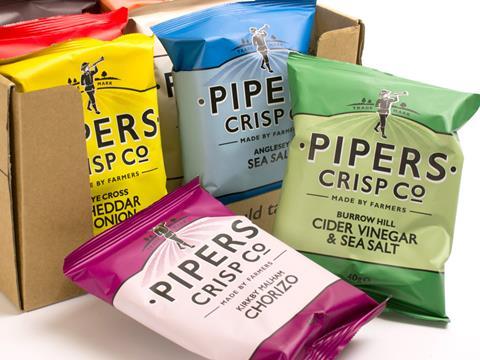 Walkers owner PepsiCo has entered the premium hand-cooked crisps space with its acquisition of Pipers, but will eschew the brutal promotional retail environment to grow its presence in foodservice.

The deal, for an undisclosed sum, comes a year after The Grocer revealed that the fast-growing Pipers Crisps Co was considering a sale.

At the time observers noted the opportunity to shift Pipers into a premium retail brand, given it had thus far avoided UK supermarket listings to focus on independent retailers and the foodservice industry.

However, The Grocer understands PepsiCo intends to retain this foodservice focus rather than integrate the brand into its wider retail snacks offering to compete with brands such as Tyrrells and Kettle.

The Pipers deal is recognition that PepsiCo is “underweight in foodservice” said one industry source. “It doesn’t have the right product for it and Pipers has a premium and hand-cooked Kettle-like product that will enable it to compete.”

The sources added that while it was possible that Pipers might become listed in high-end grocers, PepsiCo was not thought to be planning to take on other premium brands in the major mults.

Last month The Grocer revealed that Kettle Foods fell to a pre-tax loss in the UK after it lost a big chunk of market share and was dragged into an intense promotional war for shelf space. Kettle and Tyrrells have been competing on promotional price with Walkers Sensations and own-label alternatives, despite their more expensive hand-cooked manufacturing process.

PepsiCo was also attracted by the opportunity to further internationalise the Pipers brand, the source added. Pipers sells into almost 40 other countries and in its most recently reported financial year, to 31 January 2018, the business’s sales reached £11.4m - up 16.3% on the previous 12 months.

The value of the deal was undisclosed, but was reportedly around £20m at a multiple of two times sales.

The multiple is understood to be similar to that of fast-growing infant snacks brand Kiddylicious, which was bought by Lotus Bakeries in July a deal worth around £42m on projected 2018 sales of £21m.

“Pipers shares our uncompromising commitment to delivering on taste and quality and we’ve long admired their entrepreneurial spirit,” said Ian Ellington, general manager of PepsiCo UK. “The Pipers brand has a strong proposition within the market, with standout taste, flavours and appeal.”

Over the past 14 years, Pipers had “developed innovative products to suit evolving tastes while establishing a strong foothold in the market” said its MD, James McKinney.

“PepsiCo’s commitment to accelerating the growth of the Pipers brand means more people will be able to enjoy the unique, award-winning flavour of Pipers crisps.”

The acquisition is subject to approval by the Competition & Markets Authority, which is expected to be concluded early in 2019.

Last November, Pipers began eyeing up potential acquisition targets in the UK and overseas after hiring Spayne Lindsay to conduct a strategic review of options, including a possible future sale.