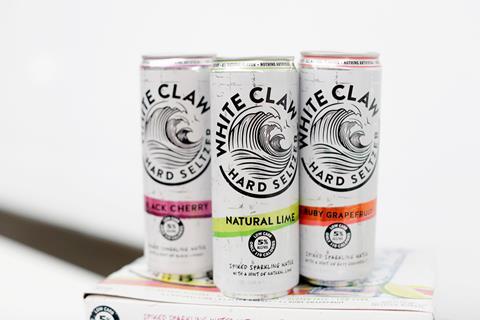 The drink has taken the US by storm over recent months

The brand’s owner, Mark Anthony Brands, has applied to register White Claw and its logo with the Intellectual Property Office.

The drink – which at 5% abv bills itself as ‘spiked’ sparkling water with different flavours – has taken the US by storm over recent months, drumming up a massive following on social media. Some fans have even gone as far as getting tattoos of the cans or getting haircuts inspired by the logo.

Take a break in this blizzard and enjoy a couple mini @WhiteClaw tattoos. Thanks @raynaxmarie! pic.twitter.com/tIBiibky6b

Sales across the Atlantic are reported to have surged 320% over the past year, with some US retailers claiming demand is so high they have struggled to keep it in stock.

And it goes further than just White Claw. Hard seltzer as a category is booming Stateside: according to Nielsen, sales of hard seltzers were up 193% over the past year [52 w/e 20 April 2019].

There are signs the trend is making its way to these shores: some of the UK’s major drinks suppliers have already launched their own hard seltzers, such as Kopparberg’s Balans, which rolled out in January.

Last week The Grocer revealed AB InBev had trademarked ‘Wandering Whistler’, its sparkling ‘hard tea’ brand, in the UK too.

The Grocer has approached Mark Anthony Brands for comment.