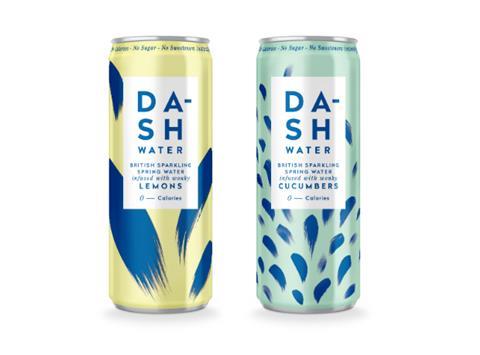 Startup brand Dash Water is making its grocery debut with a lineup of carbonated zero-calorie water infused with wonky fruit and veg.

Made from British spring water, the two-strong canned range aims to “get people excited about drinking more water”. Sparkling Lemon and Sparkling Cucumber are available now from Selfridges, and are set to roll out to Planet Organic, Daylesford and independent farm shops and delis later this month (rsp: £1.29/330ml).

Dash Water’s founders Alex Wright and Jack Scott set up the brand with input from food waste charity Feedback, having seen first-hand “the food waste caused by overly stringent regulations on the shape and size of produce”. They source wonky cucumbers from Essex farms, while ugly lemons are imported from Sicily.

“We’re passionate about offering drinks that are healthy but also crafted in a sustainable way,” said Wright, who like Scott has a background in farming. “We’ve had a great reception to our infusions so far. They’re a perfect fit for those craving a drink with provenance and transparency.”