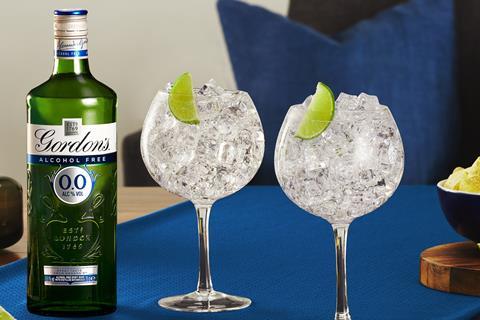 Spirits giant Diageo is taking Gordon’s into low & no with a 0% version of the massive gin brand.

Gordon’s 0.0% is claimed to contain “the same finest distilled botanicals as Gordon’s London Dry Gin” with “the bold, juniper-led character which has helped to make Gordon’s renowned the world over”.

It was made with “a unique distillation process, which involves each botanical being individually immersed in water, heated and then distilled before being expertly blended together”, said Diageo (rsp: £14/70cl).

It makes Gordon’s by far the biggest spirits brand so far to launch a non-alcoholic version of its core liquid.

“Our distillation process is a closely guarded secret, known only to a handful of people and we are incredibly proud to be bringing gin drinkers that juniper-led taste they’re expecting from Gordon’s when they choose not to drink alcohol,” said Diageo GB marketing director Anita Robinson.

It launched into Amazon and Tesco this week, ahead of a wider rollout in wholesale and supermarkets from 3 January.

The launch marks the latest in a series of major moves in low & no from Diageo. October saw it launch a non-alcholic Guinness, to much fanfare. However that fanfare was shortlived – Guinness 0.0% was recalled amid fears some cans contained a microbiological contamination.

Read more: how bigger brands are hoping to redefine the low & no spirits game