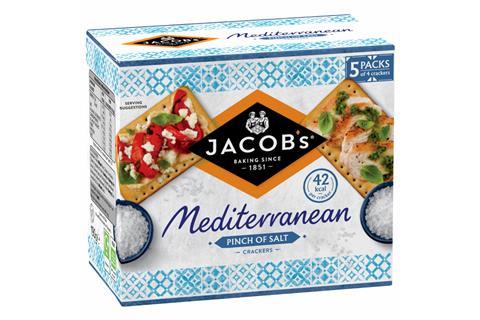 The NPD has rolled into Sainsbury’s

Jacob’s is expanding its range with a duo of Mediterranean crackers.

The crackers – which would “bring a taste of sunshine to British shoppers’ lunches” – were easily portable and suitable for adding toppings or crumbling over salads, said Jacob’s.

The savoury biscuits giant has also added a Red Leicester flavour to its Cheddars line-up.

As Red Leicester was already a popular flavour in its Mini Cheddars range, expanding it to full-sized crackers would “encourage even more shoppers to buy into the Jacob’s brand”, it said.

With the move to hybrid working, the brand was “continuing to see shoppers break free from sandwiches and experiment with more exciting customisable lunch options”, Wall added.

It comes after Jacob’s this month added a duo of ‘street food-inspired’ snacks to its Mini Cheddars lineup in a bid to lure younger shoppers to the brand.