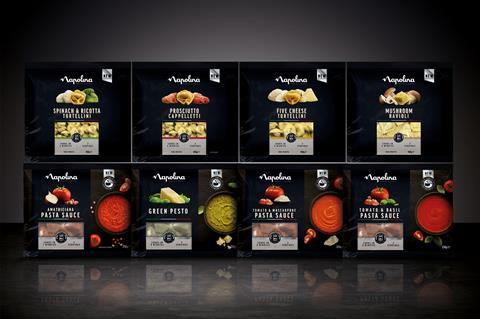 The range spans filled pastas, plain pastas and sauces which are split into small frozen portions to cut down on food waste

Napolina is moving outside ambient for the first time with a range of frozen pasta and sauces it claims are the first of their kind in the UK.

The range spans filled pastas: spinach and ricotta tortellini, prosciutto cappelletti, five-cheese tortellini and mushroom ravioli (rsp: £1.75), plain penne and spaghetti, as well as mascarpone, tomato and basil and gree pesto sauces, which are split into small frozen portions to cut down on food waste (rsp: £1.50).

The pastas can be boiled straight from frozen, while the sauce portions need heating in a pan. The range has launched exclusively into Iceland.

The launch will be backed by a £2m push throughout the year which “celebrates the romance of Italian food”, spanning digital advertising, influencer campaigns and “an increased focus on cooking with Napolina” targeted at a younger audience.

It marks the first time Napolina has branched out of its ambient heartlands. The brand is also currently eyeing moves into other new markets such as chilled pasta, where it does not currently play.

Indeed, earlier this month saw Napolina claim another market-first with a ready-to-eat canned quinoa, which rolled out as part of a quartet of canned grains and pulses.

Last year Napolina made headlines when it gave its packaging a major overhaul, ditching pastic for recyclable boxes across the bulk of its SKUs in a move it claimed would remove 17.5 tonnes of plastic from the UK waste stream every year.