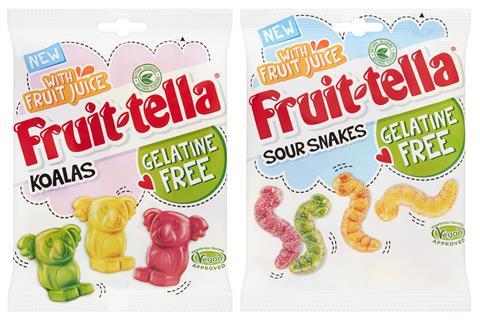 The jungle themed jellies are on shelf at Morrisons, Ocado, Co-op and WH Smith

Both featuring the Vegetarian Society’s ‘vegan approved’ stamp, they are made with real fruit juice and natural colouring.

The jungle themed jellies are on shelf at Morrisons, Ocado, Co-op and WH Smith, with additional retailers set for later in the year. A 100g PMP pack for £1 will be available exclusively from c-stores.

The NPD was created to tap “the biggest trend of the 21st century – with over 23 million people now open to a meat free diet” PVM said.

There was “huge demand for vegan sweets” added Fruittella brand manager Diego Pol. “But often the taste and texture suffers when gelatine is removed. We’ve worked to make sure our new Fruittella jellies have the same great taste that people expect of any Fruittella product.”

The vegan candy will be supported by the brand’s “biggest campaign in recent years”, including TV and VOD.