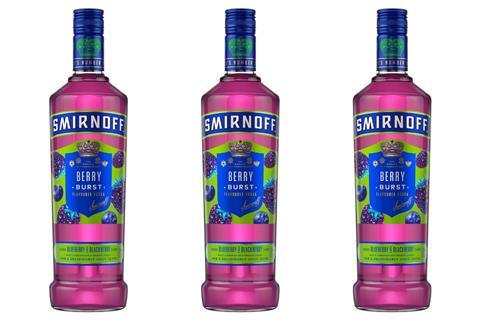 The NPD will roll exclusively into Morrisons on 20 June

Smirnoff is adding a berry-flavoured vodka to its line-up.

Berry Burst (37.5%) is billed as a “bold coloured liquid” featuring “natural flavours of blueberries and blackberries combined with unmistakably smooth Smirnoff No 21 vodka”.

It will roll exclusively into Morrisons on 20 June (rsp: £16.50/700ml), with a wider rollout planned across the off-trade and on-trade from September 2022.

Head of Smirnoff GB Nick Payman said the brand was “known for its innovation and ability to provide exciting new ways for people to enjoy vodka”.

The NPD, which tapped into “trending berry flavours”, was “a great addition to our portfolio”, Payman added.

The launch is part of a concerted effort by Smirnoff to expand its flavoured vodka portfolio.

Over the past 12 months, the vodka brand has added two other fruity flavours to its line-up: Raspberry Crush and Mango & Passionfruit.

According to Smirnoff owner Diageo, Raspberry Crush raked in £6m in retail value sales within its first 10 weeks on the market.

In March, Smirnoff poured the drink into a ready-to-drink format in a bid to lure new drinkers to the category.