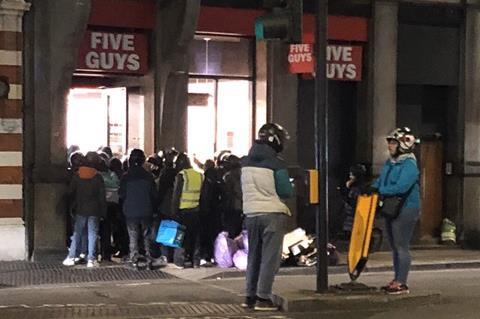 Five Guys’ stores in Fulham, Wimbledon, Kings Road and Clapham have all been the subject of separate social media complaints

Deliveroo has threatened to terminate the contracts of riders delivering from restaurants where a lack of social distancing has been reported.

Warnings have been issued to couriers who collected meals from outlets where riders had been observed waiting less than two metres away from one another.

“If you don’t keep a safe distance from others your Supplier Agreement will be terminated,” a message to the riders seen by The Grocer stated. The warnings relate to riders working in Cambridge city centre and collecting from a Five Guys in Wimbledon.

The communication comes after several complaints on social media of food delivery platform riders congregating at food outlets, despite the government urging anyone going outside to “stay two metres away from other people at all times”.

Order pick-ups have become increasingly concentrated around the few restaurants still offering takeaways, with many outlets opting to shutter completely after the government ordered they close to customers dining in.

Many of the Deliveroo platform’s most popular restaurant brands - including KFC, Burger King, Nando’s and Subway - ceased operations when the lockdown was announced.

Five Guys closed many of its outlets, but some remain open. The chain’s stores in Fulham, Wimbledon, Kings Road and Clapham have all been the subject of separate social media complaints about riders congregating.

So much for the govt & business enabling #SocialDistancing#covid19UK@Deliveroo & @UberEats drivers clustering outside the new @FiveGuysUK outlet in Fulham. pic.twitter.com/6GgCVS8SI0

The chain did not respond to requests for comment, but told customers on Twitter that “we do have signs instructing Deliveroo drivers to keep two metres apart, however, we will make sure we pick this up with Deliveroo and our store managers to makes sure this is being adhered to, to keep everyone safe”.

“If groups of riders are seen gathered outside or nearby restaurants the police will close the restaurant,” Deliveroo’s message to riders said.

“If that happens, the restaurant will no longer be available on Deliveroo and we will not be able to offer you as many orders.”

The communication implies complaints have come from customers, restaurants and riders themselves.

@Deliveroo you need to tell some of your riders about social distancing in Liverpool today pic.twitter.com/qSEuGaiiKR

Deliveroo said it was in constant contact with riders about adhering to social distancing guidelines, including regular prompts in the app.

Lorry drivers transporting food have reported being given no choice but to wait in small waiting rooms in close proximity to each other when delivering to and from distribution centres.

“Drivers are the backbone of the UK’s supply chain and must be protected at all costs. The health and wellbeing of the nation depends on it,” the organisations said in a joint statement.

The supermarket said it had issued new hygiene and social distancing guidelines for drivers.

Just over a third of respondents to an FTA survey said their drivers had been denied access to washing and toilet facilities on the road and at distribution centres, due to concerns they might spread coronavirus to employees.

“Since 2017 delivery drivers have had the legal right to use toilets and washrooms in commercial premises yet we are still receiving reports that access to these facilities is denied,” the FTA, RHA and Unite said.