Heinz and Deliveroo partner to take Beanz brand into delivery 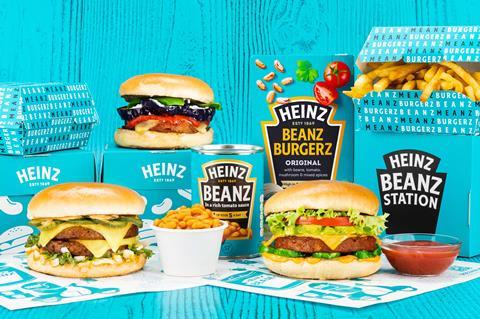 Heinz will offer a menu consisting of five different Beanz burgers, four of which will be vegan

Kraft Heinz is taking its Beanz brand into delivery.

The fmcg giant has partnered with Deliveroo to launch a new offer of burgers and sides across London to showcase its plant-based Beanz burgers range.

It will offer a menu consisting of five different Beanz burgers, four of which will be vegan, such as an All-Day Breakfast Burger and a Tex-Mex Burger.

It marks the latest in a series of plays from Heinz to take the Beanz brand outside its canned heartlands – a push it has dubbed the ‘Beanz Liberation Exercise’ which will see Beanz expand into a slew of new formats and categories.

The Deliveroo offer kicked off this week and will run until 31 October. The burgers were “one of a selection of new Beanz products being released this year and next, and we can’t wait to hear what the public think of them”, said Heinz UK new ventures marketing lead Sam Ford.

Speaking to The Grocer earlier this year, Heinz boss Jojo de Noronha said she wanted to turn Beanz into “the new avocado” by playing up their health credentials and versatility.

“One of the key elements that wasn’t working was we hadn’t taken advantage of the equity of the Heinz brand,” she said. “The last five years the company has done well, profitability-wise, but hasn’t brought a lot of innovation to the market.”

The Grocer also recently revealed Heinz looked set to move further into the plant-based arena with the launch of a new brand called VBQ, for which it applied to register the trademark with the Intellectual Property Office in July.