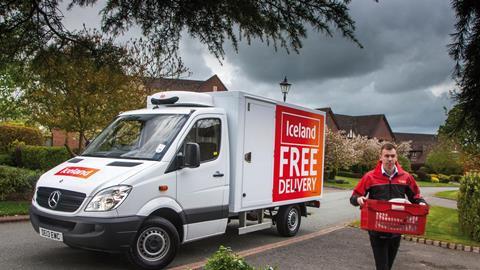 How Iceland got online delivery availability back to normal

Booking an online delivery can feel a bit like trying to get tickets to Glastonbury at the moment.

Go to Morrisons.com today and you are likely to find yourself behind hundreds of people in a virtual queue. And Ocado’s Trustpilot score may have shot up, thanks to a pop-up asking those lucky enough to get to checkout for a review, but the situation there is hardly better. Perhaps Ocado should ask customers waiting to get on the site if they’d like to review it, and see what that does to the Trustpilot rating.

In fact, Ocado, like Sainsbury’s, has had to limit bookings to customers on its priority access list in parts of the country. With millions of people at higher risk from coronavirus because of their age or an underlying condition, getting essentials to them is pushing online grocery to its limit.

For non-priority customers, a slot within the next week from Tesco, Asda or Waitrose would be something to celebrate. Online grocery is simply swamped by demand.

Except at Iceland. At the start of lockdown in March, Iceland appeared to be struggling as much as all the others. It offers delivery bookings up a week in advance, and was fully booked in some regions, with no slots to offer.

This week it had next-day slots again. Not only that, but it’s provided this availability for all customers while also prioritising the vulnerable. Like other supermarkets, Iceland has access to the government’s ‘shield list’ of highly vulnerable people who have been advised to stay home for 12 weeks. Iceland has so far contacted 250,000 people on it who match its customer database, to offer them priority slots. It has also added a facility to its website for those on the list – but not its customer database – to also register for priority treatment.

How has the frozen food retailer done it?

The Grocer reported last month that Iceland was increasing its online delivery capacity by 250%. It seemed like a lofty figure. Less so now.

One weapon in Iceland’s arsenal has been The Food Warehouse. Iceland was already slowly rolling out online delivery from The Food Warehouse estate before the lockdown began. It’s added stores that are much bigger than a typical Iceland, at about 15,000 sq ft compared with the more usual 5,000 sq ft.

But that’s a small part of the story, according to an Iceland spokesman. The Food Warehouse is “doing a very big increase in online volumes through the stores that already offered the service” but its “still only in a minority of the 121 stores,” he says.

Store picking has afforded retailers a higher ceiling for rapid expansion than automated warehouses, according to analysts, and Iceland’s online operation is almost entirely store-pick-based. It has one ‘dark store’, in Hyde, Greater Manchester, “but otherwise it is all done in normal stores” says the spokesman.

It’s an advantage because it allows expansion via recruitment, and Iceland has hired at least 3,200 store assistants to help with picking orders during the Covid-19 outbreak, along with 1,100 extra drivers. It’s also working with new third-party drivers and fleets, the spokesman says.

Iceland usually offers a delivery service for in-store shopping, but the capacity for this has been redeployed to online orders.

Of course, Iceland isn’t the only one to have grown its online capacity impressively. Tesco last week became the first UK retailer to fulfil a million online orders in a week, after hiring 4,000 new drivers and 12,000 new pickers. It’s aiming for 1.2 million weekly slots, double the number of slots at the start of the Covid-19 crisis.

But that won’t matter to shoppers who now find they can get a slot. Iceland is aiming for another 200,000 slots over the next few weeks, bringing the total to 700,000, so availability might even stay good as people migrate to the site from overloaded rivals.

Some of them are likely to stay as pressure eases, surely showing an opportunity missed by offline Lidl and Aldi, the two rivals from whom Iceland is under pressure most.