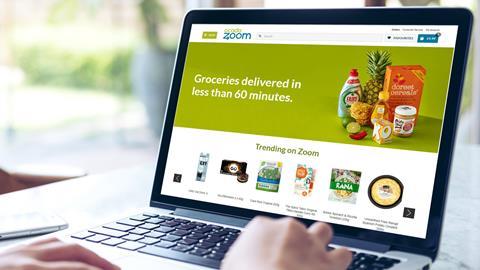 Ocado Zooms ahead of rivals in rapid delivery service comparison

News this week of the scrapping of the one-hour Tesco Now service in London shows just how difficult a nut to crack rapid grocery delivery is.

Yet there has never been more competition to get the model right. Last week the Co-op finally entered e-commerce with the launch of an electric cargo bike delivery service from a branch in London’s Chelsea. At the start of the month, Ocado launched Zoom from a mini automated fulfilment centre in Chiswick. And Waitrose has been steadily expanding its two-hour service across London since September, going up against Sainsbury’s Chop Chop, which has been delivering in zones one and two since 2016.

So who’s doing it best? We subjected the key services to a Grocer 33-style online test, focusing on functionality and service rather than price. We based it on a smaller basket of 12 items, more typical of a shop-for-now convenience mission. They included specific branded choices such as a Pizza Express Margherita, generic requests such as oat milk, and some fresh requirements including basil and ice cream.

Ocado CEO Tim Steiner boasted of a “unique model with micro-automated centralised fulfilment” offering 10,000 products when Zoom was announced in February. It uses similar robot technology to one of the online supermarket’s full size customer fulfilment centres but on a smaller scale, and it’s delivering results.

Ocado achieved the highest overall score, at 96. It also came with the lowest standard delivery charge, at £1.99 (a far cry from Tesco Now’s £7.99 for within an hour) - though two rivals offered free delivery for first-time users.

Ocado Zoom was easy to use, only one alternative had to be accepted and there were no substitutions. The shopping arrived an impressive 29 minutes after ordering, and the deliverer was the only one who offered to help bring it in.

Sainsbury’s came second with 79 points, scoring strongly for availability, with 10 of the items available and acceptable alternatives for the other two.

However, there was one substitution and our mystery shopper said the caller who informed him by telephone was “unhelpful and blunt”. ”She said there’s no oat milk. I said what are the alternatives? She said, well, you can have whatever you want.”

Ordering is by app only and every time something is added to the basket, the user has to click back to the previous page to continue shopping.

An autocomplete predictive search function, based on your previous search, was also irritating. If you clicked on the phrase, instead of automatically entering it into the search box to allow you to amend it as necessary, the app simply searched for it again without further prompting.

Delivery was free with the first order (reduced from £4.99) but the discount code had to be entered manually. It arrived in 57 minutes, just within the guaranteed one hour.

Waitrose did well in most respects, scoring 74 overall and managing delivery in one hour 37 minutes, well within the guaranteed two hours. The site provided acceptable alternatives to five unavailable items. Delivery was again free with the first order (reduced from £5) and the site automatically entered the discount code on checkout.

Communication could have been better though. The digital receipt did not include pack sizes. A mystery £1.50 refund, notification of which was received about an hour after ordering, turned out to be for the fresh basil, which wasn’t included in the delivery.

Amazon is known for its speedy delivery but it underwhelmed. Availability was good - only two alternatives had to be accepted and there were no substitutions. But one item had to be bought in duplicate to bring the order up to the minimum £40, including a £3.49 delivery charge. The service is an add-on for Prime members, subject to an additional monthly £3.99 subscription fee, following a 30-day free trial.

The wait was also long - this is a scheduled service rather than on-demand. More points were lost because the deliverer arrived 15 minutes ahead of the time slot with no warning and was a bit “dump and go”.

The Co-op came last with 63 points. Despite being billed as a two-hour service, it offered a scheduled slot starting two hours 40 minutes after ordering.

The service promises 1,500 products and was the weakest on availability. On ordering, four alternatives had to be accepted and there was no fresh basil. Oddly, there was also no Tampax, and a search for ‘sanitary towels’ produced only kitchen towels. Email notification of three substitutions was sent an hour after ordering, in an email with a ‘contact us’ link.

All the shopping came in paper bags except for the Co-op’s, which was in three bags for life at a cost of 20p.

Website/navigation score: Starting from a maximum of 20, one point deducted for each criticism, and two for an overarching issue that could affect the whole shopping experience, such as slow-loading results. Punctuality/driver/service max: The totals of the scores for the two criteria below (punctuality and driver/service) divided by two, out of a total of 20.

Punctuality: Twenty points for under half an hour; 15 under for an hour; 10 for under two hours; five for under three hours; zero for longer.