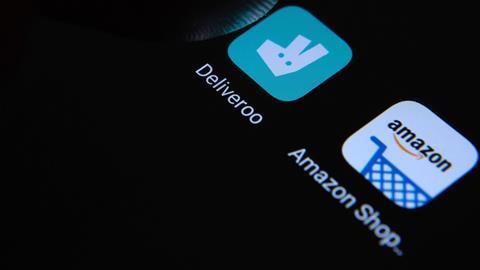 Why aren’t Amazon and Deliveroo happy with the CMA verdict?

It should have been good news for the pair, considering the CMA was initially dubious about the merger. However, submissions to the authority, published last week, reveal they are unhappy. Less surprisingly, so are their rivals.

So, what are their respective concerns? And what clues do they provide to Amazon and Deliveroo’s future intentions?

The CMA’s latest decision is its second provisional clearance of the deal, but on new grounds. Instead of reasoning Deliveroo could otherwise go bust – as it did in its earlier decision in April – it now concludes the deal is “not expected to damage competition in either restaurant delivery or online convenience grocery delivery”.

But there are limits to its approval, including the size of Amazon’s stake: 16%. The authority says a greater level of control, “in particular a full acquisition of the company”, could trigger a further investigation.

Damien Ryan, senior associate in competition at Brodies, understands why. “Although the CMA was satisfied this level of shareholding will give Amazon material influence over Deliveroo, it doubted Amazon would be able to drive Deliveroo’s policy to Amazon’s benefit, for example in a direction that would lead to Deliveroo forgoing otherwise attractive commercial opportunities,” he says.

Rivals, on the other hand, believe the CMA caveat doesn’t go far enough. One delivery startup CEO claims the deal is already damaging competition. “When you pair Amazon’s deep pockets, data and logistics, and Deliveroo’s hugely established brand in the on-demand food delivery segment, with its reach and choice and catalogue of relationships, a moat forms which we have had outlined to us by multiple investors as being uneconomical to attempt to compete with,” they say.

Domino’s Pizza, meanwhile, doubts whether the companies will stick to the suggested 16% cap. It says the legislation prevents the CMA from re-examining the deal were Amazon to take a bigger slice of Deliveroo, as long as it falls short of “de facto control”. This “effectively gives Amazon carte blanche to increase its stake to potentially up to 50% without attracting any further scrutiny”.

The Amazon-Deliveroo deal is among a string of food delivery platform tie-ups globally in 2020 as the market consolidates.

April: The CMA clears the £6.2bn merger of Just Eat and Takeaway.com

July: Uber agrees to acquire food delivery startup Postmates in the US for $2.65bn

Even if it does stick to a 16% stake, Just Eat says it is “inconceivable” that Deliveroo won’t gain huge influence from putting Amazon’s UK CEO in a board position.

Amazon would surely share its knowledge of restaurant delivery, while Deliveroo CEO Will Shu’s previous fawning over the e-commerce giant – he has called it a personal inspiration – “demonstrates Deliveroo is not considering this as a pure investment”, Just Eat says.

Just Eat also points to the possibility, considered in an earlier phase of the CMA’s inquiry, that Deliveroo’s subscription service could be bundled into Amazon Prime and the companies “could use this strategy to foreclose Deliveroo’s competitors”.

For Deliveroo’s part, it argues that Amazon Prime’s provision of groceries is “entirely different” to its own offering. It believes the CMA is wrong to bundle rapid grocery delivery and scheduled online grocery delivery together in an “entirely artificial construct”. The deal will actually increase competition and “benefit small restaurants and takeaways”, it says.

This thinking explains Amazon and Deliveroo’s argument against the 16% caveat. The CMA’s finding should be “regardless of the percentage” Deliveroo says. More control over Deliveroo, Amazon says, shouldn’t be considered a separate transaction. And “even an acquisition of or a larger investment in Deliveroo would not raise competition concerns”.

Ryan says this doesn’t necessarily mean Amazon wants a greater stake. “Their submissions put down a marker that they are not accepting the CMA’s approach as correct, even though the outcome is in their favour, which lays the groundwork for them to challenge that approach in future,” says Ryan.

As one competition lawyer source added: “If nothing else, they may want to be seen to keep the potential for an Amazon takeover alive in order to maximise Deliveroo’s share value.”

The source goes further: “It is in Amazon’s interest to try to maximise the coverage of a clearance decision and say it doesn’t matter if the stake was 100%; there would be no reduction in competition.”

In their eyes,  it is quite clear that Amazon “is trying to future-proof an outright takeover”. “As a perpetual loss-making company, Deliveroo will need more funding – and Amazon has deep pockets and funds loss-making subsidiaries as we know,” they say.

Miya Knights, head of industry insight at Eagle Eye, also believes Amazon “absolutely” will want to up its stake “if its initial investment generates good returns”. “Both also want to exploit their last-mile delivery expertise across each other’s sectors,” she adds.

So this issue of the 16% cap may prove a recurring theme in the next weeks and months. The CMA’s latest decision is not final – the statutory deadline for that is 6 August – and even that is unlikely to end the saga.

“It is unusual to have so many third-party submissions about a deal. So I think the CMA is in a very difficult spot in reaching a final decision – with the merged parties if it is blocked, or third parties if it is cleared, likely to take the CMA to the UK Competition Appeal Tribunal on judicial review,” the senior competition lawyer says.

So there may be plenty more twists to come in this saga.