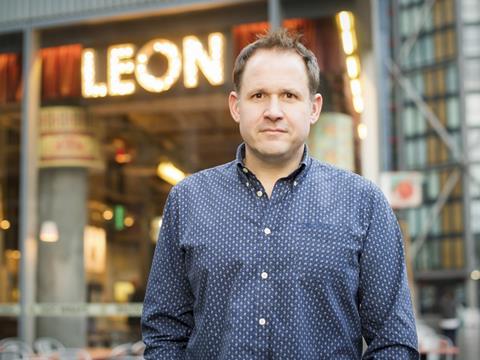 Henry Dimbleby crams a lot in. Co-founder of fast food chain Leon, he finds time to churn out cookbooks and columns, campaign to end sloppy school meals, tweet voraciously (“my wife says I have social Tourette’s”) and still spend “90% of his time” in the open plan Shoreditch offices where we meet, dreaming up plans for London’s biggest food market.

Potted CV: Studied Physics and Philosophy at Oxford, before working as a chef at Four Seasons. Briefly became a gossip columnist for The Telegraph before joining Bain management consultants and founding Leon in 2004

Advice you wished you’d had: Focus on the stuff. In the end when you start up a business there’s so much to do and actually all that’s important is making the food better, the service better, the environment better. It’s tempting to spend 80% of your time on tables and chairs, or licences, all the crap. The only thing that’s important is the stuff.

Where do you do your grocery shopping? Costcutter Broadway Market, round the corner; Turner & George for meat; essentials online

“I’m blessed with two extraordinarily talented business partners,” he insists when I ask how he fits it all in. Leon co-founder John Vincent holds the fort at Leon’s London Bridge HQ, leaving him free to team up with Jonathan Downey at street food venture London Union.

But as the affable entrepreneur reels off rapid-fire views on Brexit (“you can’t call it Armageddon yet”), supermarkets (“pure food retail is going to die”) and his campaign against chatty packaging or “wackaging”, you get the sense he doesn’t waste much time either.

After all, this is the man who worked weekends at the Four Seasons while studying philosophy and physics at Oxford, and jotted ideas in a notebook on “eating good food in a democratic way” alongside a demanding day job at management consultancy Bain, where he was fortunate to find a fellow multitasker doing the same.

“Both me and John had notebooks from before we met about good fast food,” he recalls. “We were working with Vodafone and travelling to and from Newbury in a car and we couldn’t eat anything that was any good, so we talked about setting up a fast food place.

“We always had a view that there was a system that created fast food. What went in one end was crap, and then what came out the other was crap. But if you put in good stuff, and inventiveness and creativity, you might be able to create something that came out great.”

Though the idea was always of revolutionising fast food, Dimbleby even did a spell flipping Whoppers at Burger King to learn the art of consistency in fast food. And he also admits that the road to success (46 restaurants, £37m sales and 48% growth year on year) has been a long and winding one. “We f***ed up in so many ways, taking detours and diversions”.

Serving up sweet potato falafels and superfood salads to the masses back in 2004 was an idea way ahead of its time. “Dangerously so as it turned out,” Dimbleby laughs. “One year earlier and we probably wouldn’t be here today.”

And even 13 years after the first outlet opened in Carnaby Street, the chain can’t quite compete with the fast food giants on price. Its cheapest lunch option comes in at about £4.25, or £6.20 for the Original Super Salad, while a Big Mac costs as little as £2.99.

“The aim has always been to serve good food for everyone, and one of our constant fights is to bring the entry price level down,” he accepts. “If you use predominantly wheat and sugar as your main food groups and you freeze stuff you can get it really, really cheap, so we’re never going to be able to compete right at the lower end, but if we can get our entry level from £4 to £3.50 we think there’s a massive untapped reserve”

”People feel more miserable than they should because they’re not eating well and that’s a big problem.”

The premium might explain Leon remaining firmly London-centric for now, with only four restaurants outside the capital (a fourth is imminent in Manchester). Dimbleby isn’t convinced. “Healthy eating isn’t a demographic thing, it’s an attitudinal thing,” he says. “People say it’s about type of job or salary, but you get people who care about what they eat completely across the spectrum of society. People feel more miserable than they should because they’re not eating well and that’s a big problem. We’re one of the solutions.”

Not that you’ll ever catch the ‘h word’ in any of Leon’s marketing. “We never used the word healthy anywhere in our copy. There’s this tension in Western society that means you’re either doing stuff you enjoy that’s fun but feeling guilty about it, whether that’s going on holiday or eating something you shouldn’t, or you’re trying to be good and you feel like you’re sacrificing something, whether that’s going on a diet, or running in the rain. You’re constantly torn between these two things, and the whole idea of Leon was that it’s in the middle.”

To get on the menu, food only has “to taste great and not make you fall asleep, feel bad and wake up fat”.

That hasn’t stopped the chain from embracing the controversial ‘clean eating’ movement, using the phrase repeatedly in its tie-up with Instagram fitness guru Joe Wicks, but Dimbleby has little time for all the fuss. “Why can’t you call it clean? Why can’t you call it dirty? Why do you have to fight over these words? You know what it means.

“It’s wrong that everyone piles in on the whole movement, it’s very unfair on the people trying to eat a bit better and write cookbooks just because one person in Australia tried to fraudulently convince someone to cure their child of cancer by eating cucumber.

“Live and let live. It’s a difficult, complicated world, eating. Yes, root out the charlatans but don’t create tribes and don’t tell me one is better than the other.

“You get bad facts everywhere” after all. Only a decade ago the government was casting satfat as the bad guy and sugar as “simply bad for children’s teeth”, a faux pas it’s now trying to correct via the sugar tax. “Initially a bit wary”, Dimbleby now supports the move after chatting it through with “JV”, who “convinced me that when things are really bad you have to take direct action”, and kids slurping sugar out of a soda is “the biggest problem facing society at the moment”.

He’d know. In 2013 he co-wrote the School Food Plan, a consensual follow-up to Jamie Oliver’s turkey twizzler takedown that “avoided any massive shit show” by “trying to show what was good, explaining what worked well and creating a positive energy” around much maligned school dinners.

Despite outrage only last month at parents shipping kids off to school with lunchboxes full of cold McDonald’s Happy Meals, he’s “very optimistic” at the “massive progress” being made. He even recruited a new cook for his kids’ state primary in Hackney via Twitter, tempting Nopi head chef Nicole Pisani to swap chefs’ whites for school dinners in 2015, as part of his fight to change the perception of school food.

But though he’ll keep offering “moral support” on ongoing efforts, his focus now sits firmly with the far more grown up world of street food markets at London Union. He fell in love with the concept after visiting temporary events around the capital, offering 15-course tasting menus at a car park in Haggerston, or “extraordinary drinks” with 50 different craft gins at Dalston Yard. “I approached Jonathan Downey as it was all very transient and said this is such a big idea, you’ve got to do it on a bigger scale, and I’d love to help you to do it.”

London Union has four sites serving dirty duck rolls, liquid nitrogen cocktails and proper steak and chips. Now “we’re trying to set up this massive food market in the middle of London, with the best produce, restaurateurs and street food,” spanning up to 40,000 sq ft in an (as yet) top-secret location.

“We knew the biggest issue would be political: convincing people these weren’t going to be massive raves but important parts of food culture,” he smiles. So they recruited investors among “people on the food scene that we liked and respected,” including Jamie Oliver, Nigella Lawson and Giles Coren.

For Dimbleby this is the future. “The trends in food retail will be more experiential, people will focus more on what they eat as a way of keeping them healthy, and there’ll be a blurring of boundaries, and more of what we’re doing where it defies a category at all.”

Whether it’s through Leon, better school dinners or the new wave of street food operators, “people will get educated and realise more and more how we’ve been destroying society with bad food over the past 50 years”.