Finnebrogue to open new £25m plant-based factory in County Down 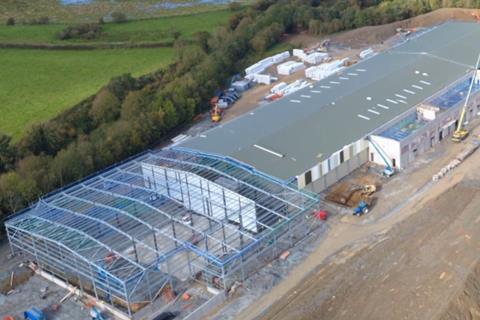 Naked Bacon owner Finnebrogue Artisan is to create 300 new jobs after investing £25m to build what it is describing as Europe’s “most advanced” plant-based food factory.

Work on the new factory at Finnebrogue’s County Down headquarters started in July and is due to be completed by the end of the year, with the 200,000 sq ft facility set to act as a springboard for a further push into plant-based next year.

The investment at the huge new site – equivalent in size to three football pitches – will take Finnebrogue’s head count to 1,200 by the end of 2021 and would provide “a valuable boost to local employment opportunities in Northern Ireland, which has seen sections of its aviation, shipbuilding and hospitality sectors decimated by coronavirus”, it said.

It also means the supplier will have spent £80m in building four new factories during the past five years, amid soaring demand for its nitrite-free Naked meat range, own-label sausages for the likes of M&S and Asda and its fast-growing meat-free lineup.

“This state-of-the-art factory, combined with some extraordinary technological leaps in new product development, will enable us to make nutritionally balanced, delicious and sustainable plant-based food that’s virtually indistinguishable from the meat we will be imitating,” said a spokesman for the business. “It is a tantalising prospect for flexitarians up and down the UK.”

The supplier is expecting the investment and subsequent production to help boost its turnover to more than £220m by 2023, up from just £3m 10 years ago. It is set to reveal the portfolio of products it will be launching in January, but it is expected they will fall under a more diverse Naked brand – which expanded into plant-based with a meat-free bacon last month.

“Plant-based food does not have to be nutritionally barren or extortionately expensive – nor does it have to taste like cardboard,” said Finnebrogue MD Andrew Nethercott.

“There is surging demand from an educated and discerning consumer base in Britain for more delicious, nutritious, sustainable and affordable food – and particularly plant-based food,” he added.

“Flexitarians – or ‘meat reducers’ – are our market. The people who buy our Naked Bacon because it is made without nitrites and our Naked Sausages because they are preservative-free – are the same people who are increasingly seeking one or two days off meat a week, but without the compromise associated with most of the products currently available.”