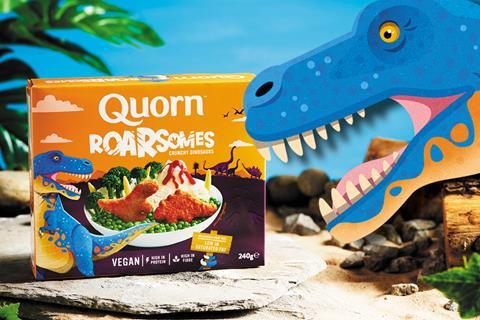 Quorn has launched its first product aimed specifically at children, having spotted a perceived gap in the market for convenient meat-free mealtimes.

Roarsomes, which are dinosaur-shaped chicken nugget-style pieces, have been made using the brand’s mycoprotein base and come in a crunchy breadcrumb coating.

The frozen NPD is set to begin rolling out into Iceland stores from next week with further listings set to go live during May (rsp: £2.20/240g).

The plant-based giant said the launch had been prompted by Kantar and IRI research that had revealed more than half of seven to 15-year-olds were eating nuggets every fortnight. However, Quorn said there were no meat-free options catering for these occasions.

Given further research conducted by YouGov in 2020 had shown younger consumers were driving growth in plant-based diets due to environmental concerns, Quorn added that it wanted to give them the opportunity to “play a big part in the change our planet needs”.

“Now is the time that everyone needs to do their bit towards protecting the environment, and reducing meat in our diets is one of the best and easiest ways we can all help,” said marketing director at Quorn Foods, Gill Riley.

“Roarsomes provide families with a tasty and fun way to engage children at mealtimes, making an early and delicious transition into meat-free. This can be carried through younger consumers’ diets, as they grow older and learn more about sustainable eating.”

The launch will be supported by Quorn’s ongoing ‘Helping the planet one bite at a time’ campaign which it launched back in January.

The multimillion-pound marketing push for 2021 has taken in TV, VoD, social media, PR out-of-home and in-store activity. It has also featured Liverpool FC, with whom Quorn formed a sustainable protein partnership last year.