Tesco to remove plastic from branded and own-label tinned multipacks 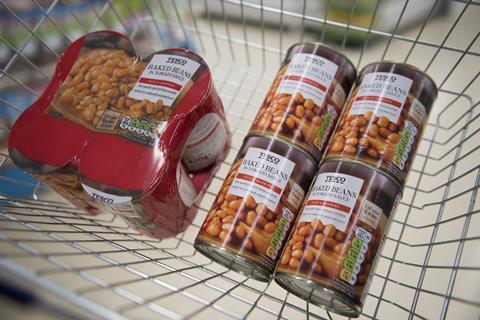 Tinned baked beans, tuna and soup are among the most frequently bought grocery items in the UK

Tesco is to slash plastic from multipack tins of products such as Heinz Beanz, in a move it claims will save 350 tonnes of plastic a year.

The supermarket said it was removing 67 million pieces of plastic from the shelves by replacing tinned multipacks with plastic-free multibuys. It currently sold 183,000 such multipacks every day, it added.

Instead of being able to buy multipacks that are cheaper than the same number of individual tins, Tesco said it would introduce permanent, multibuy reductions on products, alleviating the need for plastic.

It said it had worked closely with Heinz on the announcement.

Tesco said more than 40% of its customers included multipacks in their shop, with products including baked beans, tuna, tinned tomatoes and soup are among the most frequently bought grocery items in the UK.

The change applies to both Tesco own-label and branded products,

The move has been trialled with customers in Tesco’s Bar Hill Extra store and will roll out across all Tesco stores from 2 March.

In August last year, Tesco briefed 1,500 suppliers that packaging would be a factor in its decisions on which products are sold in its stores.

“We are removing all unnecessary and non-recyclable plastic from Tesco,” said Tesco CEO Dave Lewis today. “As part of this work, removing plastic wrapped multipacks from every Tesco store in the UK will cut 350 tonnes of plastic from the environment every year and customers will still benefit from the same great value ‘multipack’ price. This is part of our plan to remove one billion pieces of plastic in 2020.”

President of Kraft Heinz Northern Europe Georgiana de Noronha added: “We’re excited to be partnering with Tesco on this. While we know we have more to do, this initiative is good news for the environment, and for the millions of people who enjoy Heinz varieties every day, as they’ll still be able to benefit from the same great value for money.”

Paula Chin, sustainable materials specialist at WWF, said the move supported “Tesco’s steps in the fight against plastic pollution. We need to remove unnecessary single-use plastic wherever possible, to stop the contamination of the natural world. If we want to protect nature we need more businesses to follow Tesco’s lead, before we run out of time to fight for our world.”