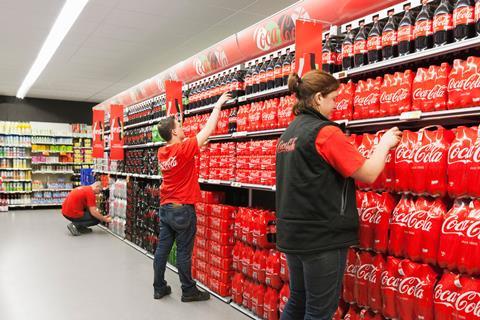 As Coca-Cola prepares to drop plastic wrapping from more than 30 million multipacks each year, it has ramped up promotional savings in the mults and shifted deals to the front of store.

The brand’s total number of featured space promotions in the major supermarkets has fallen since this time last year, from 131 to 122. However, average savings are significantly deeper - up 9.4 percentage points [Promo Dynamic Brands 52 w/e 16 September 2019]. Shoppers are now enjoying an average saving of 27.5%.

This reflects a further shift by the soft drinks brand away from x for y deals, largely in favour of save deals offering higher average savings. It also increased its use of half-price deals.

In total, multibuys accounted for just over a third of Coca-Cola’s total featured space promotions, compared with over half this time last year.

“Coca-Cola has been one of the main brands to continue to use of multibuy offers over single product deals,” says Assosia director Kay Staniland.

“The latest data shows a shift in that philosophy. We captured 74 promotions (61%) using the save mechanic and only 50 (39%) using multibuys. This is much more in line with Coke’s biggest rival, Pepsi-Cola, which has 70% save promotions versus 30% multibuys.”

Coke’s shift is, in part, the result of retailers choosing to focus on single price point mechanics rather than multibuys, Staniland adds. “In order for Coca-Cola to continue to take featured space locations, it needed to offer more products on single price point promotions or risk rival brands being given priority.”

It comes as Coke has taken a major swing towards the till aisle, where its promotional activity is up 20.8 percentage points year on year. Fizzy drinks are “mainstays of featured space locations” in impulse, Staniland says. “Consumers expect to be able to pick up a bargain, so Coca-Cola needed to adapt its promotional strategies to utilise this space.” Six of the other top 10 most promoting brands also increased activity at the tills.