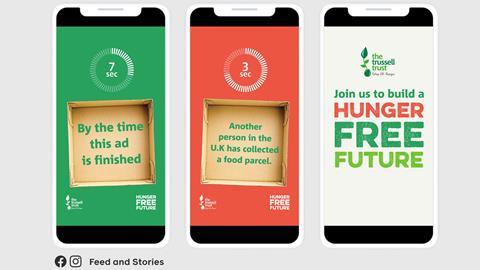 Facebook and the Trussell Trust: driving support for a hunger-free future

As 2020 has been the year of change, the power of community and giving back has grown.

Before 2020, hunger and destitution in the UK were already issues. The effects of the Covid-19 pandemic inevitably had a knock-on effect on an already growing issue. During the lockdown, 100,000 people turned to food banks for the first time and as the festive period approaches, 670,000 more people in the UK could be struggling to get by and afford the bare essentials like food.

Each year the Trussell Trust supports over 1,200 food banks across the nation. This winter their network could give out a food parcel every nine seconds. Their ‘Hunger Free Future’ campaign calls on the nation to help end hunger and destitution by signing up to become a long-term supporter – helping to donate your time, your voice and money.

The Trussell Trust partnered with Facebook as they have a shared objective in mobilising communities to help each other. Working together to help promote engagement on their Facebook and Instagram channels with the aim of driving awareness of the national poverty crisis. The focus of the partnership is to drive action to help end the crisis, whilst also testing out formats for future campaigns.

Working with the team at Facebook, the Trussell Trust optimised their UK-wide campaign which started running in early November and will continue through to the end of this year. The focus of the campaign was not only to drive immediate support so that no family goes without food as we head into Christmas, but to also drive a long-term pipeline of supporters who are informed, care and want to take action. These supporters being the key to ending and destigmatising poverty and creating a momentum across communities to support one another.

The campaign tapped into the shocking fact that the Trussell Trust are expecting that food banks could give out food parcels every nine seconds in the UK this winter. This helped to capture the attention of potential supporters, whilst keeping the core campaign messaging consistent throughout the creative assets.

“Whether it is connecting people and their communities or running local fundraisers, we’ve seen the positive role Facebook can play in highlighting key societal issues. With over one million non-profits using our platform, we’re proud to work alongside the Trussell Trust to help raise public understanding and empathy of the drivers of food bank use,” Steve Hatch, Facebook VP Northern Europe, says.

Through Facebook, they were able to test standard creative versus interactive creative to drive awareness and intent for charities. The design was led by the Facebook Creative Shop team and powered by the Facebook Mobileworks for Good program and the Marketing Science team. From this there was an array of assets including an augmented reality (AR) filter produced by Headraft and a Playable ad by 9-16. 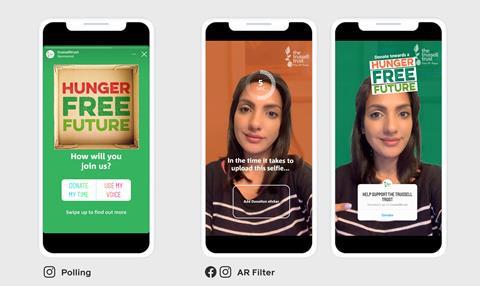 The campaign has been staged into phases. The first phase, which is across Facebook and Instagram including Polls, is designed to raise widespread awareness, creating a movement to drive the nation to sign up as supporters of the Hunger Free Future campaign. This will help create a pipeline of advocates who the Trussell Trust can then mobilise to take action towards a more just, compassionate society.

The second phase of the campaign, which was across both Facebook and Instagram and including the filters, playable ads and gifs, is designed to drive donations. Utilising the interactive nature of Instagram polling which performed well in the first phase.

Both the AR Filter and gifs were aimed at both communities and the Trussell Trust’s celebrity supporters to amplify across their own channels and help build even more awareness.

But how well has the campaign done so far in helping raise awareness and action?

“In the first six months of the pandemic, food banks in our network provided 1.2 million emergency food parcels to people unable to afford essentials, and it’s likely that food banks will be busier than ever in the lead up to this Christmas,” Emma Revie, Trussell Trust CEO, says.

”This is not right – we need to end the injustice of people needing food banks and build a hunger free future. We’re very grateful to Facebook for their support throughout the pandemic, which is helping us build people’s understanding of why anyone needs a food bank, and what actions we can take to work together towards a future where everyone has enough money for the basics.” 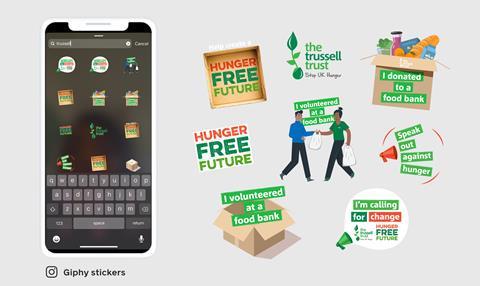 The Hunger Free Future campaign is already proving to put the UK’s poverty crisis top of mind and drive action through the power of community. It’s not only down to the hard work of the Trussell Trust and their campaign with Facebook, but the generosity of the grocers who also helped amplify this campaign both in paid and organic content. It’s the collective power and thanks to the Grocery industry giants including Tesco, Asda, Waitrose and Morrisons, the Trussell Trust and the teams at Facebook, The Source, 9-16.com (Playable ad), headraft.com (AR filter) that people across the country have been able to see how they can directly help build a future where everyone has enough money for the basics.

To learn more about how you can get involved, donate and support the campaign visit the Hunger Free Future site: https://www.trusselltrust.org/hunger-free-future/. 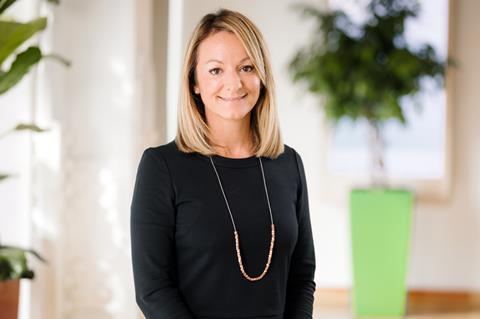 Katy Clark is head of industry, grocery at Facebook. With over 20 years experience in sales, marketing and commercial roles within the retail and grocery industry, she joined Facebook in 2018 and leads the team responsible for partnering with grocers to help them acquire new customers, increase loyalty, drive store foot traffic and sales, grow e-commerce revenue and measure the efficacy and impact of their marketing programmes.