Morrisons widens meat-free offer with Vegetarian Butcher and This listings 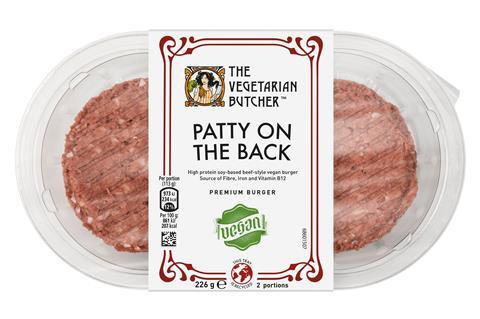 Morrisons has widened its meat-free offer with major listings for The Vegetarian Butcher and This.

Both brands rolled into the retailer last week, accompanying their launches with NPD.

Netherlands-based The Vegetarian Butcher, which was snapped up by Unilever in 2018, has rolled six products into 450 Morrisons stores, including its vegan What the Cluck chicken-style pieces and new Patty On The Back burger.

Promising to rival “the meatiest of burgers”, the soy-based vegan patty (rsp: £3.99/226g) is targeted at barbecue season. It browns and crisps “just like the real deal” says The Vegetarian Butcher – which has embarked on a £4.4m campaign that will include a three-month TV ad push.

It comes after the brand helped Burger King roll out vegan versions of its Chicken Royale and Whopper burgers.

Lardons is one of three new products unveiled this spring by This. It added Isn’t Pork Cocktail Sausages (rsp: £2.75/150g) in April – its first foray into chilled snacks. BBQ-orientated Isn’t Chicken Skewers (rsp: £3.50/320g) will hit Tesco later this month.

“Landing in the big four has been key target for us, and we’re delighted to have achieved it in such a short space of time,” said This co-founder Andy Shovel. “We’re on a mission to get more people eating plant-based and a ramped-up presence in mainstream retailers is a vital part of that journey.”