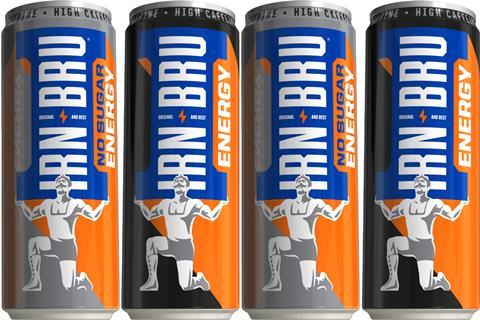 The drinks rolled out in Scotland in May

Irn-Bru’s duo of energy drinks is set for a national rollout after launching in Scotland earlier this year.

Owner AG Barr said the brand had “outperformed its closest competitors since launching in Scotland” with “70% who tried the product purchasing it more than once and 80% saying they intend to buy it again”.

Both Irn-Bru and Coca-Cola have challenged the energy category’s long-standing heavyweights – Lucozade, Red Bull and Monster (which collectively racked up £94m in growth last year) – with their own spins on the category [Nielsen 52 w/e 24 February].

The omens are good for both newcomers: Irn-Bru has sold almost £545m since launching in Scotland, while Coke’s energy drink has already racked up value sales of £4m since its launch in March [Nielsen 52 w/e 7 September 2019].