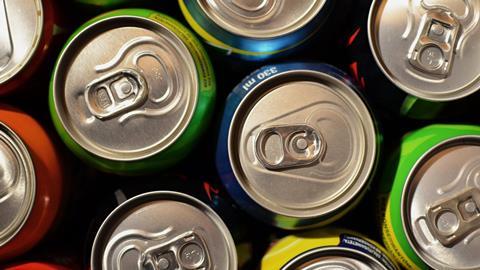 Today’s Brits want more than a standard can of sugary pop. Instead, they are open to more adventurous ingredients and premium fare

Today’s soft drinks consumers are a discerning bunch. They are paying closer attention than ever to sugar content, demanding more adventurous flavours and they won’t compromise on taste, our exclusive consumer poll with Harris Interactive reveals. And these fresh attitudes are opening up some fresh opportunities for growth.

1. Half of consumers drink fizzy soft drinks more than once a week 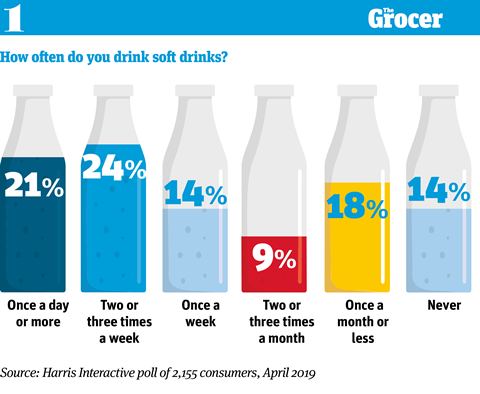 The love of fizzy soft drinks remains alive and well in the UK. Half of consumers will take a sip once a week or more, and for a fifth that is at least once a day.

The regularity of consumption is fairly evenly spread across demographics. The only group to report significantly different habits are those aged 55-plus, of which 26% say they never drink fizzy drinks. Still, even in this group, 30% indulge once a week or more.

The near-universal appeal of fizzy drinks is reflected in the sales data. Over the past year, Brits have bought 125.6 million more litres of carbonated fizzy drinks, adding an extra £271.8m to the market [Kantar 48 w/e 24 February 2019]. That data was taken since the introduction of the soft drinks levy, showing all the negative publicity around sugar content didn’t hamper market performance.

2. Younger consumers are more likely to see fizzy soft drinks as a treat 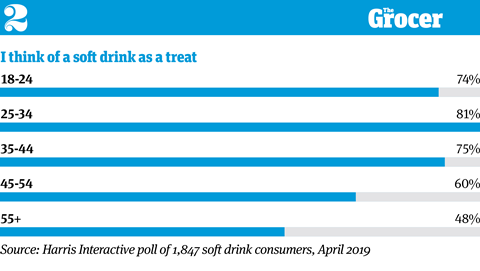 Younger consumers are drinking more fizzy drinks than the 55-plus age group – and this might be why. Our research found eight in 10 of 25 to 34-year-olds see these drinks as ‘very much’ or ‘something of’ a treat. That number is nearly as high among 18 to 24-year-olds and 35 to 44-year-olds.

However, that falls sharply to 60% of those aged 45 to 54, and less than half of the 55-plus age group, suggesting the treat appeal declines with age.

Soft drinks companies are now trying to corner this treat market, which may prove crucial for pushing higher-priced items. Indeed, Kantar data shows average soft drink prices have risen ahead of levy-related gains over the past year. The rise of more premium, treat-led formats such as glass bottles are one reason behind those price increases and resulting value gains.

3. Sugar concerns have risen over the past year 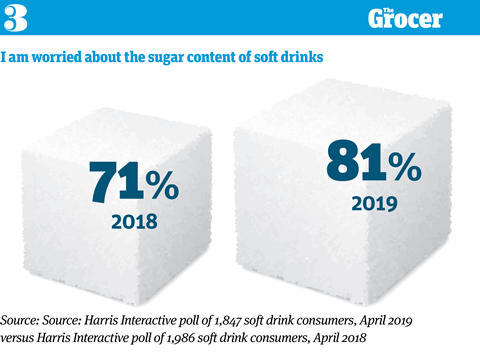 No surprises here, then. Last year, just before the introduction of the soft drinks levy, consumers were concerned about the sugar content of soft drinks. A year after its introduction, they are even more so. In our latest poll, eight in 10 said they were concerned to some extent and over a quarter described themselves as ‘very concerned’.

It’s not just talk, either. This concern is playing out in buying habits. Since the levy, Brits have bought 200 million more litres of diet fizzy drinks, and 80 million fewer litres of standard stuff [Kantar 48 w/e 24 February 2019]. That means diet variants now make up 61% of the market value.

4. But sugar content is still less important than taste and price 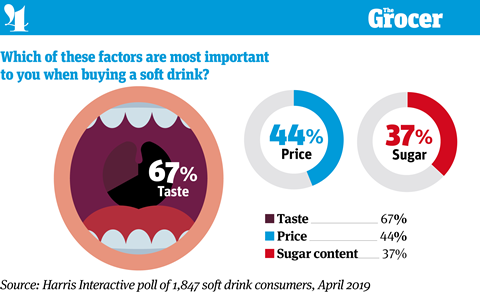 Yes, Brits are concerned about sugar. But they’re not going to buy a virtuous soft drink if it’s overly expensive and the taste isn’t there. So sugar stands as the third most pressing factor for consumers when it comes to choosing a fizzy soft drink. That only changes among the 55-plus age group, who deem sugar content more important than price.

Still, one factor uniting all age groups is the importance of taste. That explains the initial backlash against reformulation of classic recipes such as Lucozade Energy and Irn-Bru (though both are reporting an upturn in sales after the furore died down).

Coca-Cola says this insight is what made it stick to its guns on its Classic recipe and push the taste credentials of its new Coca-Cola Zero Sugar formulation. “We stood firm that we would not reformulate unless the end product tasted as good, or even better, than the original,” says Simon Harrison, vice president of commercial development at Coca-Cola European Partners GB. 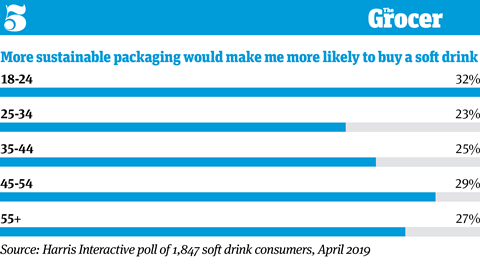 The up-and-coming generation is making their feelings known on climate change and environmental issues. So it’s not surprising that those at the younger end of the scale are

particularly keen on the idea of more sustainable soft drinks packaging. A third of 18 to 24-year-olds said it would make them more likely to buy a soft drink, compared with 23% of the generation just above.

“Sustainability and recycling have become more of a priority for many consumers,” says CCEP’s head of sustainability Nick Brown. So, many giants, including CCEP, are making packaging more sustainable by using materials such as recycled PET.

All this consumer concern isn’t necessarily changing buying habits, though. Consumers actually bought 2% more soft drinks in PET bottles over the past year, despite the plastic backlash [Nielsen 52 w/e 18 March 2019].

6. The youngest generation is also more dubious about packaging-free options such as SodaStream 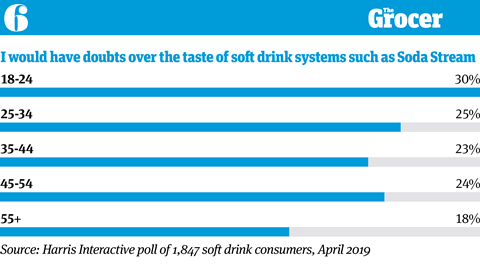 Here’s another example of the difference between what consumers say and what they do. Younger consumers should be more open to systems such as SodaStream, given their environmental concerns. And over a quarter of 18 to 24-year-olds agreed they are environmentally friendly.

But these shoppers were actually the most dubious of all age groups. Almost twice as many 18 to 24-year-olds were concerned about the taste as over-55s.

Still, there is plenty of potential for this burgeoning PepsiCo-owned venture, which claims to be the “fastest-growing beverage company in the world”. Only a third of consumers were put off by the upfront cost of options such as SodaStream and just 23% said they would prefer to buy established soft drink brands, meaning there are plenty out there who would be open to the idea.

7. Seven in 10 would be interested in a functional soft drink 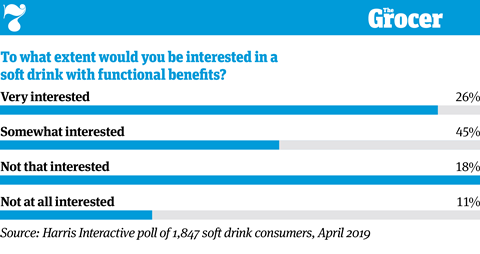 Functional is fast becoming the new buzzword in food and drink. If a product can taste good and deliver some health benefits on top of that, then consumers are buying in.

That’s equally true of the soft drinks market. Seven in 10 consumers would be very or somewhat interested in a functional soft drink that could offer benefits such as relaxation or an immune system boost, our research found. That figure rises to 83% among 18 to 34-year-olds. Only 11% of the total sample said they would have no interest at all in the concept of a functional soft drink.

“Consumers want more than just hydration from their drinks and this is creating demand for products with functional benefits, such as vitamins and minerals that contribute to higher energy levels, cognitive support and general wellbeing,” says CCEP’s Harrison.

8. That interest is particularly high in the capital 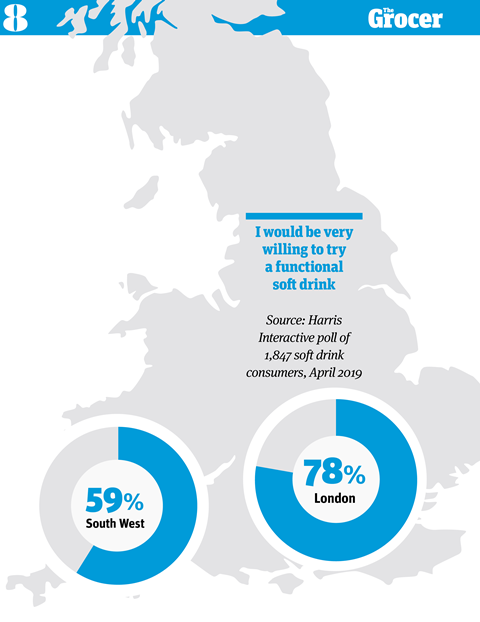 When it comes to thirst for functional drinks, it turns out there is plenty of regional variation. In trend-led London, nearly eight in 10 expressed an interest in a functional soft drink.

That dropped to less than six in 10 in the south west. In fact, a fifth of consumers in that region said they would have no interest in a functional drink.

What’s more, the capital is willing to experiment with more unusual flavours to get functional benefits. A fifth of Londoners said new and interesting flavours were important to them when buying a soft drink, compared with just 13% in the south west.

That may even be flavours that would make others run in the opposite direction. In the capital, 18% would dabble with chilli in their soft drink, compared with just 14% overall and 7% in the north west.

9. Consumers are open to a soft drink with a kick, but don’t want too much spice 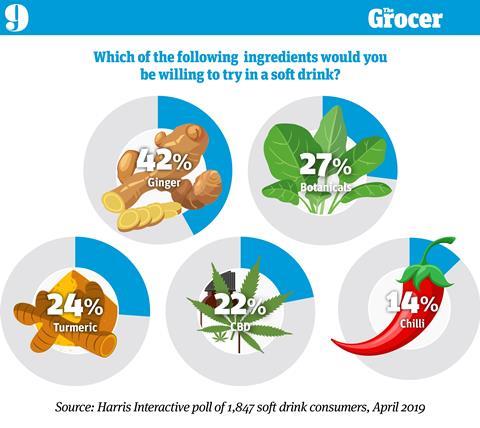 We’re seeing more adventurous ingredients make their way into soft drinks, from cayenne pepper to apple cider vinegar and turmeric. So most consumers were open to at least one of the ingredients on our list – ginger, turmeric, botanicals, chilli and CBD – being in their beverages. Only 34% said they would try none of the above.

Ginger came out as the top ingredient, perhaps unsurprisingly given the popularity of ginger beer. That 42% of consumers would try the ingredient suggests Brits like a bit of heat in their drinks.

But that clearly only goes so far – chilli was the least popular ingredient, with only 14% willing to try it. There was a bit of a gender split, though. While 16% of men would try chilli, only 12% of women said the same. 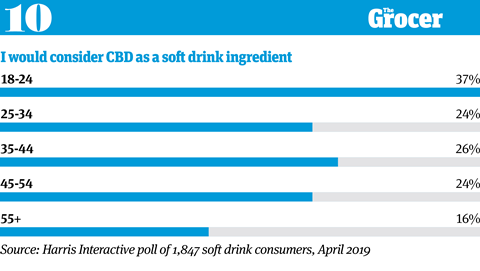 The hype around CBD shows no sign of dying down. Yes, it took a blow in January, when the FSA classed it as a ‘novel food’. That means it will have to go through a series of approvals before it’s considered fit to sell.

But there’s a reason the ingredient has got everyone talking, including those in the soft drinks industry. Nearly four in 10 of the youngest age group polled said they would be willing to try CBD in a soft drink. That’s pretty good going for an ingredient that is still a way off achieving mainstream status in food and drink.

It seems the older generations may take more convincing, though. Willingness to try a CBD soft drink seems to gradually decrease with age, to just 16% of over-55s. There is also a slight regional variation. Over a quarter of Londoners would consider trying CBD as a soft drink ingredient, compared with 19% of those in the north east.