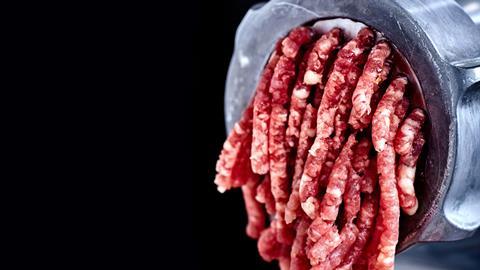 Supermarkets incurred the wrath of farmers – and some shoppers too – by selling imported mince when they could have sourced it here. Why did they do it?

The mults have largely stuck to sourcing fresh beef from the UK and Ireland since the Horsegate scandal of 2013. In fact, some 83% of all fresh beef facings in the mults were British in January, according to AHDB’s latest Beef Watch survey.

But with fresh supermarket mince volumes up 45% at the height of coronavirus panic buying [Kantar 4 w/e 23 March], both defended their moves as necessary.

Sainsbury’s insisted it remained “committed to sourcing British” but had “experienced exceptionally high demand” as it stressed its move was temporary. Asda echoed its rival. Its “main priority during these uncertain times is to ensure we can provide groceries week in, week out, for our customers”.

But the move caused fury among farmers amid lower farmgate prices due to the collapse of the foodservice market. The retailers and their beef supplier ABP were accused of “selfish” and “underhand” tactics by the Ulster Farmers’ Union; the National Beef Association questioned the robustness of Polish animal welfare standards following its ‘sick cow’ food scandal last year; and The Grocer understands there was a heated row in the now-regular conference calls between retail bosses, Defra and officials from the devolved administrations.

So were Asda and Sainsbury’s justified in looking outside the UK for mince supplies?

ABP stressed the Polish meat it sourced for Sainsbury’s and Asda made up less than 1% of the 28,865 tonnes of fresh primary beef sales recorded by Kantar in the four weeks up to 23 March. But its usual UK and Irish processing capacity had been unable to keep up with “an unprecedented increase in demand over a very short period of time”, said a spokesman.

He also stressed the Polish beef was produced “to the same exacting traceability and quality standards as all ABP beef”.

Aldi, which has made great play of its UK sourcing for fresh meat in recent years, also went outside its normal supply routes at the peak of last month’s panic buying. It listed a Republic of Ireland beef mince SKU under the Heritage Farms brand last month (with the label noting it was ‘minced in UK’). Aldi stressed this “supplier brand special” was not within Aldi’s core range, which remained UK-sourced. But a rival supermarket CEO accused Aldi of “word games”.

“You would expect a brand called Heritage Farms to be British. They wrap themselves around the union flag for any reason they can think of, but when it comes to anything foreign they dress it up.”

But the National Beef Association focused its guns on Asda and Sainsbury’s. In an open letter it said the “Polish mince fiasco” was “unacceptable to us and, we suspect, to the British population”.

The NBA may well have a point on the public’s perception of the whole affair. After a barrage of negative news headlines, shoppers appear to have swerved the product. Photos posted on social media show No Fuss mince left on shelves and on promotion in Sainsbury’s - bringing the SKU’s already competitive rsp down from £3.05/500g to £1.99.

Fuel to the fire

Adding fuel to the fire, Tesco and Morrisons have also publicly stated they did not have to resort to importing beef from outside the UK or Ireland.

“I would say you’re not looking hard enough [if you have to source abroad],” said a senior big four supermarket source. “The clue is in the name, it’s a minced item.”

Despite a “significant increase in demand” a Tesco spokesman told The Grocer all its mince was “exclusively British and Irish”. It had also run promotions on steak “to encourage customers to buy more British at a time when farmers cannot sell to restaurants”.

“I would say you’re not looking hard enough. The clue is in the name”

Morrisons made hay with full-page ads in the national press playing up its British farming credentials, in a move applauded by NFU president Minette Batters on social media.

Ultimately, Asda, Sainsbury’s and ABP simply “panicked” at the unprecedented surge in demand, suggests one senior meat sector source, who also argues ABP’s Polish business was ultimately a “positive”, despite the controversy, as it meant it was able to react quickly.

A senior retail industry source, though, is more scathing. “Where people find it difficult is that the mince was called No Fuss. Does that mean British mince is a fuss?” the source says.

The industry felt “badly let down”, the source adds. “You can choose what you put through the mincer - you could put fillet steak through it. So, while there’s a lot of pressure, there’s plenty of hind quarter. The industry is already calling out there’s an excess.”

The entire Polish affair was “hopefully a one-off” says British Meat Processors Association CEO Nick Allen, who sees it as a “total distraction” to the real issue in the sector: carcase balance caused by the total loss of restaurant trade.

Processors were already under pressure last year from a plunge in profitability caused by oversupply amid Brexit stockpiling and low retail prices. The coronavirus pandemic will have only exacerbated these structural issues, adds Allen. The BMPA warned earlier this month the surge in mince sales meant 60% of all beef sold in the mults was now mince or other low-value cuts.

This rapid change in shopper habits, and a slump in sales of higher-value cuts, could ultimately lead to a supply crisis at the farmgate, it warned.

“The portion of an animal sold as mince is typically not very profitable but is balanced by selling more expensive cuts,” Allen said at the time.

A recession could heap further pressure on the sector as it would “prolong demand for mince, which would stay really high, and that will leave us with an ongoing carcase imbalance problem”, Allen warns. Cold stores are also filling up fast with beef that has no market, he points out.

AHDB’s overall cow price had already fallen by almost 11% between 21 March and 4 April, Allen says - due in part to the lockdown-prompted exit from the market of McDonald’s. And if the current conditions continue, it is inevitable there will be “further downward pressure on farmgate prices”.

The mults - backed by an AHDB marketing push to promote steak nights - appear to recognise the need to promote other cuts.

Promotions across the mults fell significantly during the panic buying of March.

And fresh meat promos remained down 32% this four-day Easter bank holiday weekend compared to last, according to Assosia data. But there was still significant activity across the big four, with 655 promotions, with Sainsbury’s, which increased its number of Easter fresh meat promotions by 77.9% to 169, leading the field.

The more supermarkets can do to promote anything but mince, the better, adds Nick Allen, who also echoes calls from the farming unions for government intervention during the current crisis through storage aid or direct loans.

“The alternative would be to make mince more expensive,” he adds. “But I don’t see any retailers keen to put up prices - the press would turn on them.”

However, that may ultimately be the only way to rebalance the market, suggests another senior meat sector source.

“This carcase balance problem is going to be catastrophic for farmers and processors,” the source says. “What we need is a complete revaluing of the meat on offer. That means there needs to be an acceptance customers will have to pay a bit more for mince, while other cuts should become slightly less expensive. Inflation could be our friend.”

In the current climate, this would be a bitter pill to swallow - especially with supermarkets making such a killing.