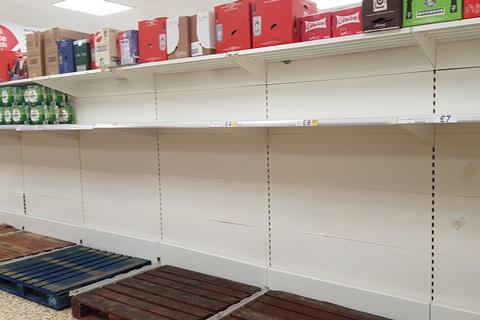 Along with several other retailers, Tesco brought back in a raft of restrictions in September, amid concerns of a second wave of the virus, but yesterday announced the list of products had been expanded.

Strict three-product limits are to be introduced on eggs, rice, soap and handwash (excluding gels and sanitiser).

Tesco has also placed a one item per customer limit on toilet rolls, which became a target for stockpiling in the first wave of the pandemic.

Tesco’s lates move came despite UK CEO Jason Tarry assuring customers it had “good availability” on fresh products, which supermarket leaders have warned will be subject to shortages after Christmas because of the two-day closure of France’s border.

“As we have good stock levels, please shop as you normally would so that everyone is able to get what they need,” Tarry said in a message to Tesco shoppers.

“We continue to have good availability on the small number of fresh products, such as lettuce, cauliflower and citrus fruit, that we import from France at this time of year.”

Tarry added Tesco was “strongly encouraging” customers to shop alone in the last days before Christmas to reduce congestion in stores.

The BRC has insisted levels of stockpiling have been “nowhere near” that of the March lockdown when panic buying stripped shelves of fresh meat, pasta, rice and several non-food items, despite reports the entirety of England faces moving into tier 4 restictions, along with similar measures in Scotland, Wales and Northern Ireland.

However, the consortium has warned there wil be shortages of some fresh fruit and veg products because of the crisis at Dover.

He said Iceland had “no plans to ration products because there’s no need to, although our buyers love the idea, especially as you get to year-end bonus time, because it’s a sure-fire way to increase demand”.