Supermarkets make up for World Cup with sunny weather promotions

Following a disappointing World Cup, retailers have received a welcome boost from the weather over the past month.

As most of the UK basked in a prolonged spell of warm and dry weather - and temperatures peaked at 32.3°C in the South East of England - the supermarkets ’ forecasting paid off as they upped their promotions to entice sun worshippers and al fresco diners to their stores.

All of the big supermarkets except The Co-operative Group ran significantly more deals year on year in the four weeks to 10 August, according to the latest figures from Assosia.

Heatwave-friendly categories were promoted especially well by retailers hoping to encourage impromptu barbecues. beers , wines & spirits accounted for 21% of all supermarket promotions - up 1.5 percentage points compared with a year ago.

Tesco increased its BWS deals the most, to account for 23.2% of all promotions it ran during the period - up from 15.7% in 2013. Meanwhile, Sainsbury’s increased the proportion of its BWS deals from 16% last year to 18.7% this year.

Meat , fish and poultry items accounted for 5.8% of promotions overall - flat year on year - but this hides significant variation across retailers. Asda , Sainsbury’s and Waitrose reduced the proportion of meat, fish and poultry deals, while The Co-op , Morrisons and Tesco increased it.

Across all categories, Tesco was the biggest promoter, running 2,552 offers - a massive 17% more deals than this time last year. However, on a month-by-month basis there was little change in the number of promotions run. Asda and Sainsbury’s ran just one and two more deals respectively, while Tesco ran seven fewer.

In fact, The Co-op - which has moved to reduce its number of promotions to focus on lowering its prices long-term across the board - was the only retailer to up its deals by a significant amount month on month. 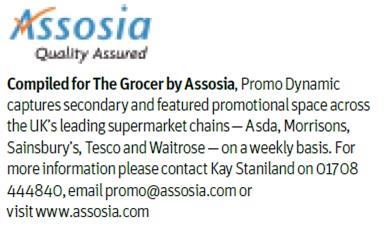